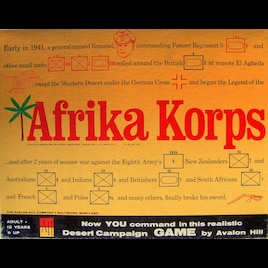 69 items
Description
Game Description:
An easy and fun historical game of Rommel’s battles with the English in North Africa during WW2. One of the early Avalon Hill beginner war games.
Ranked a 2 on Avalon Hill's complexity scale of 1 (low) to 10 (high). Playing time 2 to 4 hours.

Ever since men began making weapons they have used them to create legends. In early 1941, when his conquest of Europe was embarrassed by the rout of his Italian allies in Africa, Hitler dispatched General Erwin Rommel to forestall a seemingly inevitable Axis defeat. Reorganizing the forces under his command as the Deutsches Afrika Korps (DAK), Rommel immediately launched the first of his legendary desert offensives.

Now, the legend of "The Desert Fox" is recreated. From April 1941 through the climatic battle at El Alamein in later 1942. Afrika Korps simulates the mobile conflict between Rommel's Panzerarmee Afrika and the British Eighth Army defending Egypt and the Suez Canal. During each monthly game-turn, the initiative may switch from the Germany to the Allied player as both come to understand why Rommel called North Africa "A tactician's paradise; a logistical officer's nightmare."

NOTE:
This mod uses Mangofeet's (here on TTS) Stack Exploder mod to allow players to right click on a stack of units to show them all and then replace them or move them.

Special Thanks:
Many thanks to kryfam on BGG for his wonderful new map and counters, breathing life into an old classic. His variant Order of Battle and counters are also excellent value added.
Thanks also to Cantata on BGG for his redone rules PDF.
Cheers to Lily, here on TTS, for the ever awesome Kraken table.
Bravo Zulu to Mangofeet (here on TTS) for his awesome Stack Exploder mod.
Kudos to MadMark56, here on TTS, for his crate skins, they look superbe.
Cheers to Tumba, here on TTS, for his ammo crates, camo dice tray and dice.
Gratz to all Board Game Geek members for their continued efforts to provide images and resources to aid us in our TTS endevours. https://www.boardgamegeek.com/boardgame/2259/afrika-korps

This game is currently out of print. Please support these talented people by purchasing their other games if you play it here. Hard work needs to be rewarded to ensure we continue to benefit. If asked, I will remove this mod should copyrights be infringed in any way.

Let me know if there are any issues or things you'd like to see added. Don't forget to rate this mod to help bolster morale :)

Richthofen56  [author] Jul 7, 2020 @ 7:20am
No, can't really do PBEM on TTS Hans. The host has to save the game and restart it. Can't really send that save to anyone as far as I know. TTS is mostly for solo and hosting real people in real time. Now that said, someone may have figured out where the save game file is and ow to send it to the other player but its not the way TTS was designed.

Now Then! Jul 7, 2020 @ 6:59am
Of course...thank you. So tell me, as a TTS noobster...can I PBEM? I see the multiplayer function to host or join a server but what about turn based PBEM. Just save your turn and send?...that simple

RikJenMattic Sep 20, 2018 @ 2:00pm
Thanks for this; a great addition to your collection. I used to play this and 'Russian Campaign' a hell of a lot in my teens.