Store Page
Crusader Kings II>  Workshop > KhalO's Workshop
This item has been removed from the community because it violates Steam Community & Content Guidelines. It is only visible to you. If you believe your item has been removed by mistake, please contact Steam Support.
This item is incompatible with Crusader Kings II. Please see the instructions page for reasons why this item might not work within Crusader Kings II.
Current visibility: Hidden
This item will only be visible to you, admins, and anyone marked as a creator.
Current visibility: Friends-only
This item will only be visible in searches to you, your friends, and admins. 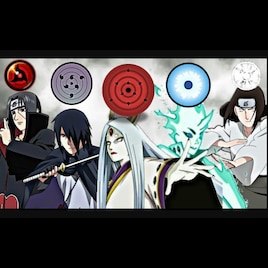 KhalO
Offline
See all 12 collections (some may be hidden)

This mod is a work in progress. Many features will be added periodically. I am releasing the mod with the purpose of discovering bugs and knowing the opinion of the users. The mod doesn't have CTD bugs and is safe to test.

You can check the last features in the Github repo [github.com]. If you found a bug or a translation error you can made a pull request

How can I get a Sharingan/Byakugan?
The main source of dojutsu are Vee and Khalga. Dojutsu inheritance works like a sort of "recesive gene", so, there are rules to preserve it in your dynasty

In the real life it is not the way in that genetics works, but dojutsu inheritance for this mod fits roleplay and strategic breeding. So, you should carefully monitor the traits of two characters before you marry them if you want to preserve those wonderful eyes.
Is this a Naruto mod?
The shinobi world is very rich and complex and I don't think I can move this world with all its characteristics to this mod. I think the dojutsu is a great feature for this sprint. Maybe in the future I can start a project of such magnitude
KEY FEATURES
Traits:Characters: Vee and KhalgaThe two main characters from the mod, the entire narrative revolves around them. At first they are two twin brothers, but their destinies soon separate and each follows different paths. Neither is playable unless you are very lucky.Vee is, if you accept her, the closest character of the two to you. She is considered the most beautiful woman in the world and her presence in your court will give you bonuses and special events:On the other hand, Khalga is the counterpart. It may be the opponent of the game, or maybe not, it all depends on the events you experience and your own decisions. Khalga also has a set of characteristics:
Popular Discussions View All (1)

Iustitia Jan 24 @ 7:02am
any updates ? Cant run it with CK2 but didnt tried with the vanialla version.

Iustitia Jan 2 @ 11:54am
It is for CK2+. You cant past some events since the game will just crash. This is the mod I want and sadly its not working...

Klastercombo Dec 31, 2019 @ 8:30am
Does someone know if the mod is simply broken rn? My Children can't seem to get the sharingan no matter how many children I have, it was working fine the last time I tried this mod