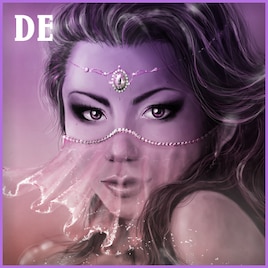 12 items
Description
If you're seeing skill icons as question marks, please make sure you've downloaded and enabled my Shared Library mod - it is required!
The Mirage is a desert-dwelling mage who can dominate the minds of their enemies with illusions and deception with *38* new skills. They can also harness chaos energy to damage their foes. Their illusions can plague enemies psychologically, or manifest as phantasmal allies and weapons. Mirage skills scale off of the Fire ability. Phantasmal weapons (crossbow and greatsword) scale on Intelligence, come with unique skills, and reset to your previously equipped weapon when they expire.

Level 1
* Chaotic Barrage - (Starter) Fire many small bolts of energy at a single target for random elemental damage. Adds a stack of Vulnerability.
* Phantasmal Mage - (Starter) Create a phantasmal enchanter with Restoration, Rain, Hail Strike and Pressure Spike skills.
* Chaos Armor - (Starter) Enrobe your target in chaos armor, increasing their Magic Armor by 50% and Physical Armor by 25%. Returns 50% of melee damage as chaos damage and protects against Muted status.
* Confusion - Project a line of arcane energy that deals chaos damage and dazes your enemy.
* Light and Shadow - Swap places with one of your summons, hiding yourself in the shadows and gracing your summon with blinding light. Clears Knocked Down and Crippled statuses.
* Runic Gale - Call up a chaotic wind to leave random runic boons for characters to claim.

Level 4
* Phantom Blade - Conjure an illusory greatsword that does chaos damage and unlocks unique skills (Thieving Thrust, Whirling Dervish, Open Wounds). Clears Crippled status, and grants Opportunist talent.
* Entropic Sphere - Shoot an orb of energy at your foes, causing random elemental damage to up to 3 enemies. Leaves a corresponding surface at each target's feet.
* Healing Mantra - Channel your energy to heal yourself and nearby allies, removing Poisoned, Decaying Touch, Bleeding, Weak and Diseased statuses.
* Great Escape - Leap away, doing chaos damage to enemies that were too close. Leaves a random (non-cursed) 2m surface at your departure point.
* Desert Sun - The sun rises, heating and weakening your enemies while doing fire damage. Adds a stack of Vulnerability.
* Mimicry - While Mimicry is active, temporarily learn any skills used against you.

Level 8
* Phantasmal Fighter - Conjure a phantasmal fighter with Crippling Blow, Provoke, Battering Ram and Whirlwind skills.
* Dispel Illusion - Reveals Invisible enemies and clears Madness, Charmed, Taunted, Terrified and Chicken Form from all allies within a cone, while clearing surfaces. Sets Clear Minded on the caster.
* Butterfly Effect - Unpredictable events can be caused by a small action, which here can be applied to evade your enemy when attacked. When struck, you will apply a random negative status to your attacker.
* Heart of Glass - Sandblast an enemy to transmute their physical armor to glass, reducing its protection by 75%. Adds a stack of Vulnerability.
* Prismatic Blades - Launch daggers of chaotic energy at every enemy around you. Can backstab.
* Amplification Aura - Upgrade negative statuses on your enemies (Chilled to Frozen, Shocked to Stunned, Warm to Burning, Dazed to Madness, Slowed to Crippled).

Level 12
* Phantom Crossbow - Conjure an illusory crossbow that does chaos damage and unlocks unique skills (Fractal Arrow, Vampire Arrow, Trick Shot). Clears Blind status, and grants Elemental Ranger talent.
* Cleansing Mantra - Remove negative statuses from yourself and purify the ground beneath you.
* Sandstorm - Summon a sandstorm, blinding and doing earth damage to enemies and objects for two turns.
* Scheherazade - Lull nearby enemies to sleep by telling a wonderful story, doing magic armor damage and buying yourself another sunrise with death resistance.
* Deja Vu - Record your target's current position and vitality. When the status expires, they will be teleported back to their recorded position and restore their recorded vitality.
* Remorse - While Remorse is active, your target will be damaged each time they cast skills.

Level 16
* Djinn - Transform yourself into a Djinn, able to grant wishes for good fortune, riches and health. Also grants Floating while active.
* Phantasmal Rogue - Summon a phantasmal rogue with Backlash, Ruptured Tendons, Throwing Knife and Chloroform skills.
* Mystical Mirrors - Conjure illusionary mirrors to deflect projectiles away from yourself. They will also deflect incoming Frozen, Burning, Knockdown or Stunned status attempts back to your attacker.
* Veiled Threat - Deceive your enemy's senses by fading yourself and nearby allies from view. Burn nearby enemies when the effect ends.
* Curse of the Ancients - Unearth an ancient skull cave from under the sands that hexes the unworthy.

*Note* All of the base game infusion skills should work on your phantasms if you use my Buff All Summons mod.

Starter Class
Mirage characters will start with a chaos staff and the skills listed above. They begin with two points in Summoning and one point in Pyromancy, and have the talent Demon (increases fire resistance). As masters of the mind, they also have one point in Bartering and another in Persuasion.

Trader
The Mirage trader's name is Zahara and she is a blue lizard in formal, violet clothing.

She can be found:
1) In Fort Joy, near Rezik the Hydromancy vendor's tent.
2) In Driftwood, by the door of the tavern.
3) On the Lady Vengeance, in Dallis' room.
4) In Arx, near the Arx center waypoint shrine.

Notes
Please do leave a comment and/or rate up if you enjoy this mod - I really love to hear from you!
Popular Discussions View All (3)

daltonfreeman96 May 18 @ 5:02pm
I also can't find the phantasmal mage.fighter, or rogue abilities

daltonfreeman96 May 18 @ 4:41pm
so i was testing out this class in game master mode, and i noticed that half of these skills are under pyro despite some of them only requiring summoning

LikeABith Aug 6, 2021 @ 6:27pm
Am I building my class wrong or something? Cause this class feels incredibly underwhelming. Occultist skills are dealing 80+ dmg at lvl 8 and the highest mirage skill deals 40 dmg

Energistik Jul 14, 2021 @ 6:32pm
I respecced into mirage with the vendor and lost all my source skills (source vampirism etc) is there a way to get them back?

Threey Sep 22, 2020 @ 10:46pm
sorry what does this scale on? I want to use chaos armor and mage armor (is mage armor from this?) for a tank build. If I want chaos armor to be stronger what do I have to put points into?

Jayzizzle Jul 21, 2020 @ 10:20am
i noticed while using this mod that the phantasmal fighter has overpower once i got to summoning 10 but it doesnt seem to have any source points. is there a way to get source points for it or is that move bugged/not useable?

helaene  [author] Jun 9, 2020 @ 6:24pm
@zombie - that should have been taken out of the description. Please download my separate Cheat Chest Add-on mod if you'd like to get free skillbooks.