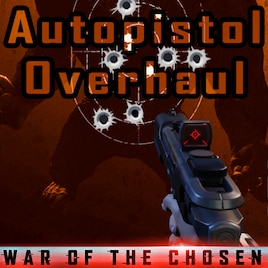 XCOM 2: War of the Chosen
Required items
This item requires all of the following other items
X2WOTCCommunityHighlander v1.22.7
[WotC] Weapon Fixes
Created by

Iridar
Offline
See all 1165 collections (some may be hidden)
You need DLC to use this item.

This item has been added to your Subscriptions. Some games will require you to relaunch them before the item will be downloaded.
Description
In the base game, Autopistols are absolutely identical to normal Pistols, and it always seemed to me like a missed opportunity to add more diversity in soldier loadouts and give more options to the commander. This mod does a lot of things at once:

3) Makes conventional Autopistols available from campaign start. Normally you would have to recruit a Templar first. Autopistols are upgraded in Engineering to Magnetic and Beam tiers alongside Pistols. Autopistol upgrade schematic is removed.

REQUIREMENTS
[WotC] Weapon Fixes - highly recommended as it fixes Stock upgrade not applying its damage on misses with Autopistols.

CONFIGURATION
I have purposefully made this mod highly configurable, and you can disable, enable or tweak almost any aspect at will.

You can change autopistol stats, or keep them same as in the base game. You can also add additional abilities to autopistols, should you want to.

Compatible with Primary Secondaries and RPG Overhaul out of the box.

The primary versions of Autopistols that are added by Primary Secondaries are actually separate weapons, so if you want, you can disable Autopistol Rebalance's effects on them.

Note that RPG Overhaul does a similar thing by itself; it changes Autopistol range table and adds crit chance. If you use Autopistol Rebalance, it will override and replace RPG Overhaul's changes. At least that's how it looked from my tests.

The base game's autopistol animations are made specifically for Templars, and they are different from animations used by normal pistols, since Templars don't have to hold their primary weapon in the left hand while firing their sidearm.

This mod replaces certain animations with a mix of pistol animations and my own animations. Soldiers that use templar animations do not require this, so soldiers that have a templar gauntlet or a sword in their primary weapon slot will be ignored.

All of this is configurable to maximize compatibility with other mods.

CREDITS AND DONATIONS
Thanks to Team CX for a warm place to call home.

Please support me on Patreon[www.patreon.com] if you require tech support, have a suggestion for a feature, or simply wish to help me create more awesome mods.
Popular Discussions View All (3)

I thought autopistols are for templars.
Nephalem
< >
97 Comments

Ironmonk Aug 25 @ 12:03am
Same problem here... and if you both are using Covert Infiltration, then that is the problem.

So, I guess we need either native support or a compatibility patch for both mods to work.

Snazzy Dragon Aug 18 @ 10:20am
@Lux Manifestus
i've been looking into it myself and am struggling to figure out where the conflict is.

Lux Manifestus Aug 14 @ 10:50am
The autopistol loads into my game but it has conventional pistol stats. Any idea what mod may be conflicting with it or what could cause this problem? I haven't modified the .ini at all.

Iridar  [author] Jul 2 @ 6:26am
@Smoke
I don't know what is "Emod", but RPGO makes its own substantial changes to weapons, so yeah obviously it's gonna be incompatible.

Iridar  [author] May 22 @ 6:05am
@LeyShade
Nothing beyond template master documentation itself. Five tier overhaul itself is the template you're looking for.
< >