Store Page
Garry's Mod>  Workshop > ☭Comrade Communist☭'s Workshop
This item has been removed from the community because it violates Steam Community & Content Guidelines. It is only visible to you. If you believe your item has been removed by mistake, please contact Steam Support.
This item is incompatible with Garry's Mod. Please see the instructions page for reasons why this item might not work within Garry's Mod.
Current visibility: Hidden
This item will only be visible to you, admins, and anyone marked as a creator.
Current visibility: Friends-only
This item will only be visible in searches to you, your friends, and admins. 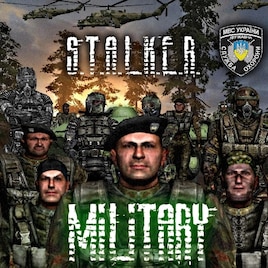 This item has been added to your Subscriptions. Some games will require you to relaunch them before the item will be downloaded.
In 1 collection by ☭Comrade Communist☭
S.T.A.L.K.E.R. Pack By Comrade


Greetings. I represent the addon from the NPC from the game STALKER, namely from the group "Military". In the add-on, sixteen people and five techniques:

Military (army) - soldiers of regular military units of the army of Ukraine. Protect the perimeter of the Zone, often make raids inside the perimeter. Not bad trained and armed.

They protect the Zone from penetration of unaccounted-for persons. Anyone who illegally penetrated the Zone of Ecological Disaster should be arrested or killed. They have the right to fire without warning, therefore military checkpoints are better to bypass the tenth road, since stalkers are usually treated aggressively, because all unofficial persons in the Zone are formally "local fauna" and are subject to destruction. Sometimes they can take bribes in the form of money or food, if they do not conduct a special operation and there are no superiors nearby. They help scientists who are officially working in the Zone, have normal relations with "Debt", although sometimes they conflict.

Military stalkers - arose when the higher military command ordered the creation of specially trained special squads for work in the conditions of the Zone.

Military stalkers are involved mainly in the sweeping of territories from large concentrations of a well-armed enemy. They are well aware of the Zone and are better positioned than the rest of the military. Also used to study the causes and consequences of the disaster, are engaged in mapping the Zone. They can walk alone or in groups of up to five people.
Also, after the departure of the Shakala group, the Swamp was chosen from the marshes.