Store Page
Torchlight II>  Workshop > doudley's Workshop
This item has been removed from the community because it violates Steam Community & Content Guidelines. It is only visible to you. If you believe your item has been removed by mistake, please contact Steam Support.
This item is incompatible with Torchlight II. Please see the instructions page for reasons why this item might not work within Torchlight II.
Current visibility: Hidden
This item will only be visible to you, admins, and anyone marked as a creator.
Current visibility: Friends-only
This item will only be visible in searches to you, your friends, and admins. 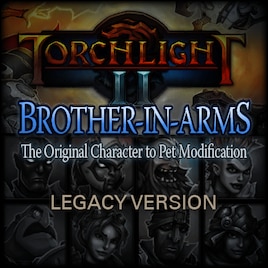 This item has been added to your Subscriptions. Some games will require you to relaunch them before the item will be downloaded.
In 1 collection by doudley
Brother-in-Arms: My Collection of Collections

4 items
Description
Version 9 - Update 15
The first and original character to pet modification for Torchlight II, was named Humans as Pets mod back in 2013. It was published at RunicGamesFansite almost at the same time with SynergiesMOD, gaining popularity side by side. It is also one of the inspiration behind Far East Pack when I introduced my custom companion, the Musha class. This is the only intensive and meticulously made modification done for the pets and it was still until I published its successor mod, the Brother-in-Arms: Warbounds.

Without further a do, please welcome it again, the newly revitalized version of Humans as Pets mod, the Brother-in-Arms!

Available Features:
Your starting pet is now your second character, with its own attribute stat and skill points system that you can adjust anytime without the need of respec or level limitations. If you have access to a level 42 requirement skill then you can set it up to its maxed rank immediately, as long as you have available skill points to spend.

Equipment customization, various weapons utilization, they are all available for our Brother-in-Arms!

18 characters to chose from as your starting pet, including the Aide Warbounds from BiA: Warbounds mod and more! Every companion is interchangeable, look for Sia in-towns for their specific transformation elixirs. Be cautious when transforming, weapons and shield would be lost if not removed.

Charge bar and its uses are all implemented for each companions.

Modified Pet Hud and Panel for better usage, Pet Panel will also have easy on the eye stat indicators including the Attribute Points Manipulator and Skills Button.

Pet Battle Stances can now be toggled by one Hotkey. Same with Toggle Pet Mod but improved, send some love there if you can.

NUMBER 1: This mod will bind your saved game, unless you use Mod Unbinder with my mod or before you remove my mod.

NUMBER 2: Equipment Comparison will not function properly anymore, best to disable it.

NUMBER 3: The Pet Inventory has been heavily modified to compliment the usage of a human companion but this also means that some mods out there might cause a conflict. Hopefully, we can prevent this by setting the mod at a high priority in your game launcher's mod load order. For ideal compatibility, follow the guide below:

Animal Vanilla Pet (AVP) and Human Companion Pet (HCP) comparison:
AVPs has tremendous amount of Health while HCPs has the same growth and amount just like your playable character.

AVPs have the Armor and Damage growth per level while HCPs don't have any but they have human Equipment at their disposal just like your playable character.

HCPs have class-specific skills and charge functions. Also, because they are human, they have the same cooldown time with spells just like your playable character.

AVPs when health is low, they will flee but for HCPs, they will perform a knocked out animation instead. This will lasts for 30 seconds, as a penalty.

Brother-in-Arms mod (BiA) and Brother-in-Arms: Warbounds mod (WB) comparison:
In BiA, attribute stat and skill points can be distributed same with our playable characters. WB is more automated when it comes to these things.

"Item comparison" and "Unmet level requirement for equipped equipment being unequipped on game load" are both not an issue in WB, these two could be the major improvements we have from BiA.

Aide Warbounds and Warbound Pets are exclusive for WB but Aide Warbounds' characters (plus new recruits) can be used as starting pets in BiA.

Both mod will be able to use all the skills that our vanilla character classes have, even their Charge functions were implemented.

Want to know more about the Warbound Companions? Read them here

For an absolute unique experience, subscribe too to Brother-in-Arms: Warbounds
http://steamcommunity.com/sharedfiles/filedetails/?id=836884927

For Non-Steam download of the classic version
http://www.runicgamesfansite.com/mod_downloads/pets-tl2/download-358-brother-arms-classic.html
Popular Discussions View All (8)

doudley  [author] Mar 9 @ 8:24am
It cannot be done with your main pet alone. Due to game's hardcoded character indexing, entry 0 is always your player then entry 1 is always your main pet. Succeeding indexes are alotted for your summons and enemies/monsters (whoever gets read first by the game). To make more pet, the only way is by summonning permanent pet/s but you have to make the game target or recognize their specific character index. So that its pet hud and inventory menu will be allowed to coexist with your main pet's hud and inventory. My BiA Warbounds mod, is the example of this. Working around with character indexing but I chose not to add third and fourth party member due to integrating UI in the game gets buggy and affects the game cache that is not meant to cater additional customizable and equippable pet.

Waves_Blade Mar 1 @ 2:31pm
Well, I meant like so you could have your own full party.

doudley  [author] Mar 1 @ 2:08pm
What do you mean and how would that be implemented?

If you meant online party/multiplay, then I cannot really tell ypu for sure, I think it is plausible but I may not be a smooth experience. You need to try this yourself and if it is workable please let me know.

Waves_Blade Jan 31 @ 2:06pm
Is there a way to enable multiple pets with this for a whole party?

But, sometimes my mod can cause a crash if a class mod have modified certain stat data. It will be tricky because Additional Classes have not been updated to the latest Synergies' classes.

doudley  [author] Sep 24, 2018 @ 6:13pm
Yes it is possible but I didn't design this mod for Synergies' difficulty. It is all up to what equipment you assign with your human companion, to be able to survive in there.

With my two Brother-in-Arms mod, you will get up to 4 human companion. Although only 2 companion can be customized.
< >