Store Page
RimWorld>  Workshop > Kiame Vivacity's Workshop
This item has been removed from the community because it violates Steam Community & Content Guidelines. It is only visible to you. If you believe your item has been removed by mistake, please contact Steam Support.
This item is incompatible with RimWorld. Please see the instructions page for reasons why this item might not work within RimWorld.
Current visibility: Hidden
This item will only be visible to you, admins, and anyone marked as a creator.
Current visibility: Friends-only
This item will only be visible in searches to you, your friends, and admins. 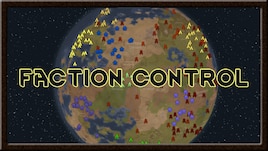 Kiame Vivacity
Offline
See all 8166 collections (some may be hidden)

This item has been added to your Subscriptions. Some games will require you to relaunch them before the item will be downloaded.
Description
"Faction Control" provides you with a number of configuration options that you can use to tailor which and how many faction groups and faction bases show up on your map. Simply visit "Mod Settings" from the game's "Options" menu.

You can define the total number of faction groups which should appear on your world map (anywhere from 0 to 30), as well as individually adjust the minimum number of groups from each faction which should be present, even removing some factions entirely if you prefer. So you could, for example, play on a planet without any tribal groups, or without any outlanders, or on a planet with no pirates, or perhaps on a planet on which the only faction groups are pirate bands.

The mod also gives you the same level of control over individual factions added by mods (up to 42 total) that it provides for vanilla factions. So, for example, if you're playing with a mod that adds several related factions, only some of which you actually want to have present on your world, well, you'll be able to tailor the planet accordingly. (This also gives you the ability to pick and choose which modded factions you want to use in any particular game without having to disable or uninstall the mods that add them.)

As you increase the total number of faction groups on your world, the number of groups which are hostile to you will scale upward, as well. So unlike most mods which increase faction counts, this one won't allow you to create a world with 30 faction groups of which only three are hostile.

You can also adjust your world map's faction base density, so you can create planets on which each faction group has only a few bases, or heavily populated planets with settlements everywhere.

The mod also gives you the option to organize bases geographically, with each faction group's bases in close proximity to each other, so that the planet looks like it's populated by actual nations, rather than just having bases scattered all over the map randomly.

Since "Faction Control" does nothing but alter initial world generation, adding it to or removing it from a game in progress will have no impact. It should be compatible with any other mods, though it should (and most likely will) override any other mods that alter faction generation.

For those finding that factions/bases are spawning in very limited numbers - make sure you disable the two unknown kingdoms from VFE Medieval (as Mk1 already said in the top discussion above) and the two Android factions added by Android Tiers. I've been through my factions one by one turning them on and off - these four factions all seem to cause major spawn issues.

Modded factions only generating with one base? Read this!
Vormir

Monkey Magic 15 hours ago
"Since "Faction Control" does nothing but alter initial world generation, adding it to or removing it from a game in progress will have no impact"

Any plans to allow existing map changes? I'd like to be able to add new factions to my existing world, and this is the closest mod I could find. I'm now peaceful with 4 of the 6 starting factions, the other two are perma-hostile, so I was hoping to either add more, or splinter some of the existing factions into new groups

Thyrork Jan 14 @ 8:51am
I'm having the same problem as Goob, plus the mechanoids are still a menace after turning them off.

SamTheTalibanMan Jan 8 @ 2:05am
Hey I'm having the issue in the troubleshooting section but the fix doesn't work for me.

Goob Jan 4 @ 8:15am
When i disable the Empire faction, they just pop up after i reload the save. Any other faction asks if it should be enabled or not but Empire just enables itself without a popup.

toots Jan 3 @ 4:36pm
I had the faction desolation issue. I tried Mk1's fix and it didn't work reliably (seed-dependent). However, turning off "dynamic faction colors" in this mod's settings seems to have fixed the issues, while also allowing me to keep the Android Tiers factions spawning.

Wuren Jan 3 @ 1:16pm
@bearhiderug
Oh I see. Have you done it before? Do you have a link to a safe procedure that won't screw up my save?

cilium Jan 3 @ 9:19am
@Salmon, I think it's an issue with Realistic Planets. Once I removed it, the button showed up

bearhiderug Jan 2 @ 6:12pm
@Wuren
No it will not, however it can be done via editing the save file.

Wuren Jan 1 @ 8:54pm
Does this mod also allow you to remove factions mid-game? Or certain settlements of said faction?