Store Page
Divinity: Original Sin 2>  Workshop > mostardageleia's Workshop
This item has been removed from the community because it violates Steam Community & Content Guidelines. It is only visible to you. If you believe your item has been removed by mistake, please contact Steam Support.
This item is incompatible with Divinity: Original Sin 2. Please see the instructions page for reasons why this item might not work within Divinity: Original Sin 2.
Current visibility: Hidden
This item will only be visible to you, admins, and anyone marked as a creator.
Current visibility: Friends-only
This item will only be visible in searches to you, your friends, and admins. 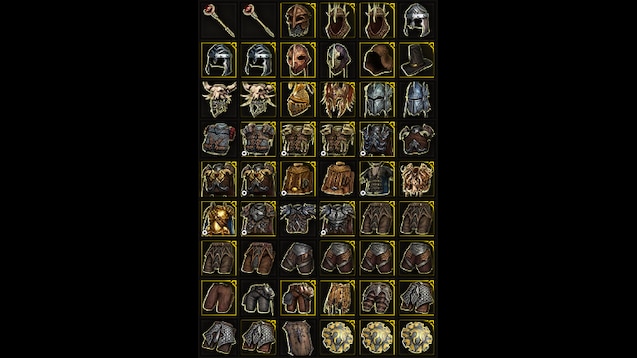 mostardageleia
Offline
See all 847 collections (some may be hidden)

This item has been added to your Subscriptions. Some games will require you to relaunch them before the item will be downloaded.
Description
What does this mod do?
It changes the game's "table" of predefined visuals per armor level. Now when you open a trader's inventory after you level up (traders inventory refresh), or when you loot something that generates random loot, armors are generated at your current level, but instead of only having the predefined visual of your current level range, they can have visuals from lower level armors too.

What does this mean?
If you like your rogue using leather armor, but at higher levels theres only chainmail for you to use, you can now find some leather armor scaled to your current level on stores. The same applies for warriors scales/plates and mages robes too. Exception: Starter equipment visuals

Can I use on a preexisting save?
It should work without issue. Previously generated equipment don't change, only newly generated stores/drops should be affected. BUT, as always when testing mods, backup your save.

Does this mod have issues with other mods?
I'm not sure, probably with mods that change the armors entries in the item progression visuals file. I'm not planning on testing with them because I've just made this one to play the game using it and thought would be fun to share. Feel free to replicate it.

Muted Jul 20, 2019 @ 9:16pm
I know it's unlikely given inactivity, but just wanted to also add that it would be AMAZING if you could do the same thing with weapons. There are NO mods AFAIK that enable us to escape hideous elven weaponry or use cool looking human weaponry from the early game.