Store Page
Divinity: Original Sin 2>  Workshop > Lady Cassandra's Workshop
This item has been removed from the community because it violates Steam Community & Content Guidelines. It is only visible to you. If you believe your item has been removed by mistake, please contact Steam Support.
This item is incompatible with Divinity: Original Sin 2. Please see the instructions page for reasons why this item might not work within Divinity: Original Sin 2.
Current visibility: Hidden
This item will only be visible to you, admins, and anyone marked as a creator.
Current visibility: Friends-only
This item will only be visible in searches to you, your friends, and admins. 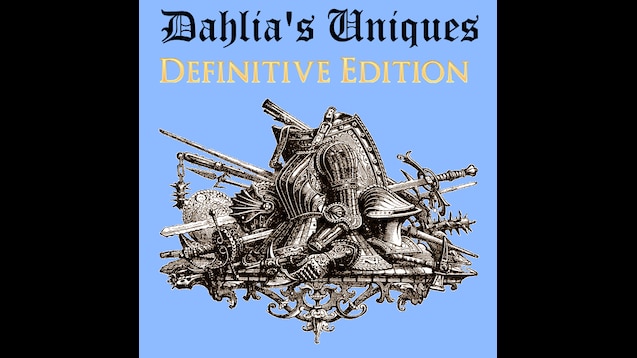 This item has been added to your Subscriptions. Some games will require you to relaunch them before the item will be downloaded.
In 1 collection by Lady Cassandra
Lady Cassandra's Mods [Definitive Edition]

9 items
Description
Dahlia's Uniques!
Have you ever thought about how those awesome uniques would be really great to utilize earlier in the game? Or even throughout the entire game? Look no further my fellow traveler!

These uniques would usually be found later in the game and usually can not be used very long. This mod hopes to address that issue and add some variety to game play options. And with it's sister mod Level Up All Equipment - Including Uniques [Definitive Edition] you can keep those uniques from start to finish.

This mod provides replicas of most DOS2 uniques at level one!
Notable Uniques Replicated

Who, What, When, Where, Why

Warning!
If you disable this mod and then re enable it later after a save. ALL the uniques will be gone, as they were created and then placed into Limbo. Thus can not be recreated because they already exist.

Milo Jul 31, 2021 @ 5:36pm
This is such a great mod. Having access to uniques early on enables some really creative and interesting builds! Would it be possible to incorporate the items from Malchezzar's BonusUniques mod? I believe they're open to the idea based on some of their comments.

Anotaros Jun 15, 2021 @ 12:20am
The Faithful set does not provide Permanent Blessed; as it does in act IV, when wearing the full set of "Faithful" items (excluding weapon) it is supposed to apply blessed that is useful to have; but requires you to only wear that gear. I pray that you can fix this.

Aatrocy Apr 21, 2021 @ 1:33am
Hello, thank you for the lovely mod.
Would like to inquire if it's possible to buy the same unique several time as in whether the shop refreshes

Lady Cassandra  [author] Mar 22, 2021 @ 1:17pm
@Teers I have a mod that allows you to upgrade all items including uniques. Please check it out to upgrade rare items as you upgrade. Having Dahlia as an upgrade vendor as well is also a great idea I will consider upgrading her in the future Happy Gaming!

Teers Mar 17, 2021 @ 8:02pm
Hopefully this hasn't already been asked... If you bought an item from her at level 4 and would like the level 10 version later, can you sell it back to her and it will upgrade? Otherwise, how do you get higher level versions of specific gear from her if you've bought at a lower level?
< >