Greenlight > Games > rustybroomhandle's Workshop
Greenlight is being retired. For more information on how to submit games to steam, refer to this blog post.
This item has been removed from the community because it violates Steam Community & Content Guidelines. It is only visible to you. If you believe your item has been removed by mistake, please contact Steam Support.
This item is incompatible with Greenlight. Please see the instructions page for reasons why this item might not work within Greenlight.
Current visibility: Hidden
This item will only be visible to you, admins, and anyone marked as a creator.
Current visibility: Friends-only
This item will only be visible in searches to you, your friends, and admins.
The Maker's Eden
Description Discussions3 Announcements6 Comments209 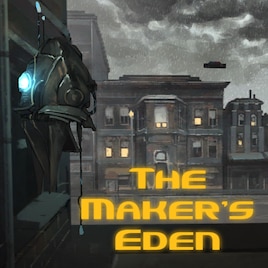 3spice
Offline
See all 35 collections (some may be hidden)

View The Maker's Eden in the store

We're out and open for business! WOOOOH!

Thanks everyone who voted us through Greenlight! <3

The Maker's Eden Act 1 is now available for pre-order[makerseden.screwylightbulb.com]! There are two options; you can preorder Act 1 by itself for $4.50 (a discount to the release price of $5), or you can grab the soundtrack while you're at it for a combined price of $9 (the soundtrack by itself is $5). Act 1 is estimated to release in January 2014, but the soundtrack is immediately available for download (and it's so good we'll be sure you'll quite happily listen to it on repeat until Act 1 is out anyway!).

We've also uploaded a new demo to replace the Prototype. It's the same content as the prototype, but far more polished and refined, fixing many bugs that appeared in the prototype and addressing some player feedback to make the gameplay a nicer experience. It's still not perfect, but it's far closer to how the final game will be.

Thanks everyone for your continued support - if you're looking forward to the game, send your friends over to vote for us on Greenlight! <3

Read More
Description
Release date: Feb/Mar 2014
The Maker's Eden is a first-person slideshow style point and click adventure game in a retro-futuristic noir inspired setting, presented in the style of a motion comic. The focus is on story/narrative and you will learn about the world by talking to characters and examining your surroundings.

Your story begins inside a stasis pod, and you have no knowledge of who or what you are. You have been given no memories, so for all it seems, you are nobody... but why are people after you, and why do they want you dead? Can't give away too much without spoiling, but there's a deep layer of socio-political commentary surrounding your personal story.

Our challenge here was to present a slideshow style adventure game in a way that does not leave you feeling detached from the environment, so we're building every hand-painted scene with a sense of depth created by layers and camera movement. Scenes are not static, we've added just enough environmental effects and animation to not break the comic-book style presentation.

Game will be released in three acts, with the first due shortly.
Popular Discussions View All (3)

Cheeseness May 14, 2014 @ 9:57pm
Congratulations on passing through Greenlight :D

The Maker's Eden has been Greenlit and is now listed in the Steam store. For the latest information, purchase options, and discussions for The Maker's Eden, please see it on the Steam Store or in the Steam Community.
Visit Store Page
For more details Visit Community Hub
For latest discussions
If you really, really want to, you can continue to the Greenlight page. Information on this page may be out of date, since all the action has moved to the areas noted above.