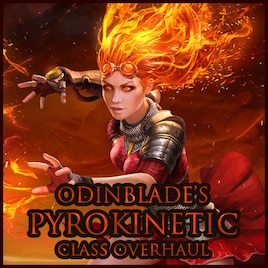 45 items
Description
This mod requires OdinCore - Mod Services to use.
Desperate to burn the battlefield to a crisp? Enjoy watching enemies melt? Dying to abolish Fire Resistances? This mod overhauls all existing Pyrokinetic skills, as well as adding plenty of new ones, to deliver a truly fiery Pyrokinetic skill tree!

"Revolution begins with an ember..."

Playstyle
Magic schools in Divinity: Original Sin 2 have been designed to facilitate user creativity of playstyles and builds; this Pyrokinetic Overhaul is no exception. With the improvements made to all Pyrokinetic skills, along with the introduction of over 15 brand-new skills, this overhaul bolsters the creativity of Sourcerers. Although magic schools are essentially an open book, I have identified 4-key playstyles I think you’ll all enjoy:
Build cards found in the image gallery at the top of this mod page give some high-level pointers into how to utilise these playstyles effectively. My personal favourite is the Scorcher, a play-style reminiscent of my Spectre class.

Skills
There are many skills in this class overhaul, so I have made an online document containing all of the skill descriptions. Please click the link below to access it.

CLICK HERE TO VIEW THE SKILLS[docs.google.com]
You may have noticed some skills from Divinity: Original Sin EE making a return with some additional effects, such as Burning Touch and Purifying Fire. I thought it was about time to bring back some old favourites to provide new and interesting build paths.

Additionally, as a comprehensive overhaul, this mod also reworks a lot of the basegame Pyrokinetic spells, and I have compiled these changes into a doc:

CLICK HERE TO VIEW PYROKINETIC SKILL CHANGES[docs.google.com]
Flameblades
Flameblades are new one-handed weapons (meaning they can be used with skills such as Whirlwind) which deal Fire-damage and scale with Intelligence - perfect to burn the battlefield! Flameblades can be purchased from Sol'Lithe, the new Pyro vendor. 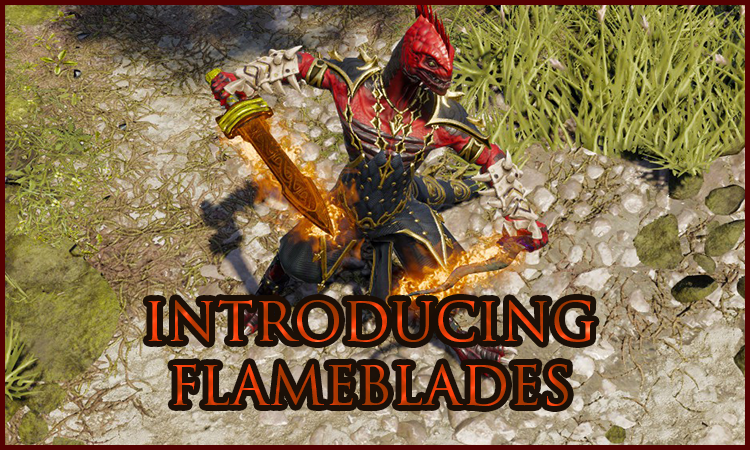 Sol’Lithe the Pyromancer is an expert in fire magic, and she is able to sell the party skillbooks. Sol’Lithe also sells crafted skillbooks at levels 5 and 13. She can be found throughout the game in various locations:

Basegame Pyrokinetic vendors also stock the new non-crafted skills and weaponry and the new vendors can be toggled on/off whenever you like using the Odinomicon mod settings menu from OdinCore.

Special shoutout to everyone who took my Pyrokinetic survey in preparation for this mod - this wouldn’t have been successful without each of you!

NOTE:THIS MOD IS NOT COMPATIBLE WITH THE CLASSIC VERSION OF THE GAME. ATTEMPTING TO USE THIS MOD IN CLASSIC WILL LIKELY CAUSE BUGS AND ISSUES.
Popular Discussions View All (5)

CanI get I all of the DE overhaul class presets to be compatible with A Lucky Break (DE) ?
Zerø
< >
318 Comments

Flesh Prison Apr 25 @ 1:50pm
With this mod enabled, the Explosive Trap huntsman/pyro skill will trigger 14 times if it is detonated before deploying (shooting it with an arrow, throwing it in fire, etc.) dealing ludicrous amount of damage.

I mean absolutely LUDCIROUS amounts of damage. There's not a single enemy I can't one-shot using this tactic and I've just made it to Arx.

(~OwO)~ Mar 19 @ 9:37pm
Love the mod, it's so much fun, but the explosive trap does a TON of damage if you explode it yourself, like one-shot any non-boss enemy (and some bosses too). This does not happen when some one else explodes the trap or if the trap explodes on it's own, winda wierd, just wanted to point that out :D

Hellwyrm Mar 16 @ 11:43pm
@Lexa, you need to download another mod for that, "Recruit companion with class mods".

Lexa T'Loak Mar 16 @ 11:36am
The presets for the different playstyles/classes exist in the character menu when you first build your own character which is why I was wondering why you can't choose those existing presets for your companion as well that's all^^

ashhhh2 Mar 16 @ 11:15am
it's not a class it's skill with some class presets if you read the description you'd know that

Lexa T'Loak Mar 16 @ 11:12am
Ok this may be a stupid question, but HOW do I get my companions to take on this class? It wasn't an option in the menu during meeting them at FJ, but I as a player was able to select a preset so it should technically work.

eXe Foodfordagods Mar 1 @ 1:02pm
Thanks for the mod, wondering though my fire slug skill didint change other than the name. Anyone else have this problem?
< >