Greenlight > Games > Asok's Workshop
Greenlight is being retired. For more information on how to submit games to steam, refer to this blog post.
This item has been removed from the community because it violates Steam Community & Content Guidelines. It is only visible to you. If you believe your item has been removed by mistake, please contact Steam Support.
This item is incompatible with Greenlight. Please see the instructions page for reasons why this item might not work within Greenlight.
Current visibility: Hidden
This item will only be visible to you, admins, and anyone marked as a creator.
Current visibility: Friends-only
This item will only be visible in searches to you, your friends, and admins.
Arena.Xlsm
Description Discussions0 Announcements2 Comments120 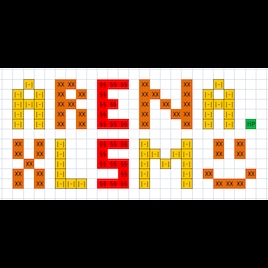 This is a strange submission for most people on here so I'll try to address some key implementation concerns that people have regarding the use of excel for a game on Steam.

1) A .xlsm file cannot be uploaded to Steam, it must be an executable file. I have been able to turn the excel file into an executable file for the purposes of uploading to Steam. Note that this is not a compiler and the game will still require Microsoft Excel 2007, 2010, or 2013 to actually run.

2) Is Microsoft Excel included in the game? No, I cannot distribute Microsoft software. There are free trials of Excel available through Microsoft which will be more than sufficient for playing the game if you do not already have a full version of Excel.

3) Why are you trying to bring this to Steam? I have never been one to back down from a challenge. If this is Greenlit, my goal is to be the first person to fully integrate Steamworks (the game overlay, achievements, etc.) into Excel. I have been playing around with the Steamworks SDK for a bit and I think I have a plausible implementation strategy for doing this involving creating DLLs from the SDK and then calling those DLLs within VBA. I won't know if it's actually doable until I get the opportunity to try within the Steam environment.

Lastly, Arena.Xlsm as a stand-alone spreadsheet is free (download the full game for free here[carywalkin.wordpress.com]).

Thanks for your support,
Cary Walkin

It's the kind of game that only a chartered accountant could build. - CNet

It’s actually quite surprising how in-depth this game is for something that runs entirely inside Excel. - Geek.com

It’s an ingenious use of an otherwise purely professional application and appears to have already struck a cord with office workers. - HackCollege

Is the game legit? Trust us: Walkin is not kidding around. Arena.Xlsm is a full RPG that’s firing on all cylinders, reminiscent of classics like Ultima or Rogue. - TechHive

The fact that someone has made a game in Excel is impressive enough, but the fact that it is actually quite engrossing and enjoyable to play - albeit extremely difficult to win - is perhaps Walkin's greatest achievement. - The Sydney Morning Herald

It sounds odd to say that the best RPG I’ve played so far this year runs entirely on Microsoft Excel. - WhatCulture

Alix Mar 8, 2014 @ 12:48pm
We don't need this type of game on Steam, sorry. If it's free to play, just keep it on your website or tumblr or where ever you currently have it at. There's no reason for it to be on Steam. It just doesn't fit in.

Godfather Jan 16, 2014 @ 5:07am
An interesting idea and implementation beautiful! Definitely Yes! And continue in the same spirit.