Store Page
Hearts of Iron IV>  Workshop > SyndieNapoleon's Workshop
This item has been removed from the community because it violates Steam Community & Content Guidelines. It is only visible to you. If you believe your item has been removed by mistake, please contact Steam Support.
This item is incompatible with Hearts of Iron IV. Please see the instructions page for reasons why this item might not work within Hearts of Iron IV.
Current visibility: Hidden
This item will only be visible to you, admins, and anyone marked as a creator.
Current visibility: Friends-only
This item will only be visible in searches to you, your friends, and admins. 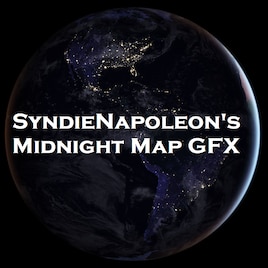 SyndieNapoleon
Offline
See all 150 collections (some may be hidden)

This item has been added to your Subscriptions. Some games will require you to relaunch them before the item will be downloaded.
Description
This mod changes the political map to be somewhat less cartoonish, and changes night time to actually look dark, instead of the vibrant blue tinge it is in vanilla.

In the far away view, the colour pallete of all countries is now less vibrant and more dreary (more fitting of a war simulator!), especially in the medium-distance mode.

In a close up view, the natural terrain is also much more visible whilst the countries borders are still noticable.
Laid snow is also changed to be less intrusive and fit better with the rest of vanillas terrain pallete.

The Ocean has been darkened to better match its real world colour, and the rediculous grey reflection has been removed, showing the fantastic image of the base games undersea terrain map.

Nights are now far darker and no longer has a bright blue hue to the world. Cities are also brighter and more fitting of a birds eye view. Closer up, the night is as dark as it is on most real world days, adding a lot of extra emersion to the game.

Additionally, the City Lights have been edited to better suit reality (Mostly, a tonne of lights were added to the USA which was very barren in vanilla, and a fair bit in east asia too).

Made Fog of War actually foggy, and less noticable at higher distances.

New update made the colours all brighten at very close distances, dunno why this is.


For the best experience, I still recommend playing with "Fog of War" off.

Updated for 1.9. It functioned fine on prior versions though.

Made it a little lighter, spread out the zoom to be not as sudden.

A permanent night version of this mod is available.
https://steamcommunity.com/sharedfiles/filedetails/?id=1481075534

I'm wondering if you could do a version where the country colors are more opaque?
< >