Store Page
Train Simulator >  Workshop > Felix Mendelssohn's Workshop
This item has been removed from the community because it violates Steam Community & Content Guidelines. It is only visible to you. If you believe your item has been removed by mistake, please contact Steam Support.
This item is incompatible with Train Simulator. Please see the instructions page for reasons why this item might not work within Train Simulator.
Current visibility: Hidden
This item will only be visible to you, admins, and anyone marked as a creator.
Current visibility: Friends-only
This item will only be visible in searches to you, your friends, and admins. 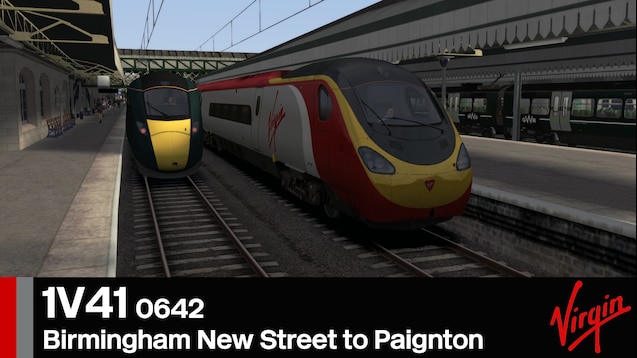 This item has been added to your Subscriptions. Some games will require you to relaunch them before the item will be downloaded.
In 1 collection by Felix Mendelssohn
Riviera Line Electrified Scenarios

2 items
Description
This is a rereleased version of my scenario 'CrossCountry to the Coast' with the Class 365s replaced with Class 387s, due to the removal of the original reskin.

Today you are driving the 1V41 0642 Birmingham New Street to Paignton Virgin CrossCountry service, for the last leg from Exeter St Davids to Paignton. Traction is in the form of a Class 390 Pendolino. It is a lovely spring morning so it should be a good drive! You will be stopping at Newton Abbot, Torquay and finally Paignton.

This scenario uses the lovely Riviera Line Electrified by joethefish! I decided to go along with his story, so the CrossCountry franchise is now owned by Virgin again, who use Pendolinos across their network. GWR continue to operate the Greater Western franchise, and now operate a 4tph stopping service between Paignton and Exmouth (using the Class 365), in addition to 2tph fast services between Penzance and Paddington (using the Class 800). Freight operations are handled by DRS, who use their extensive fleet of Class 68s across the country.

Links to reskins (and more scenarios) can be found on my site: https://www.georgejkaye.com/trains
Like my Facebook page for updates on future scenarios! https://www.facebook.com/gjkscenarios/
< >
2 Comments

Felix Mendelssohn  [author] Aug 11, 2018 @ 3:29pm
Thanks Werner, unfortunately I don't have the newer Pendolino yet but you could swap it in with RW_Tools if you wanted to use it!