Greenlight > Games > Mystix's Workshop
Greenlight is being retired. For more information on how to submit games to steam, refer to this blog post.
This item has been removed from the community because it violates Steam Community & Content Guidelines. It is only visible to you. If you believe your item has been removed by mistake, please contact Steam Support.
This item is incompatible with Greenlight. Please see the instructions page for reasons why this item might not work within Greenlight.
Current visibility: Hidden
This item will only be visible to you, admins, and anyone marked as a creator.
Current visibility: Friends-only
This item will only be visible in searches to you, your friends, and admins.
Blade of Rage
Description Discussions2 Announcements13 Comments220 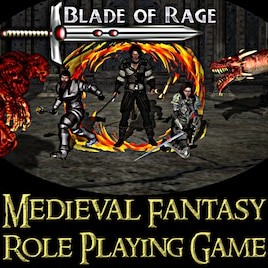 Mystix
Offline
See all 24 collections (some may be hidden)
Recent Announcements View All (13)
Blade of Rage still in development.
October 24, 2016 - Mystix

Apologies for lack of updates these last couple of months or so.
I will still be moving ahead with development of Blade of Rage despite some issues that side-tracked me for a while.

Thanks for your continued interest and support. :)
---Don

Read More
Description
Release date: Spring of 2016 (estimated)
Armed with magic-spells and a sword, a novice Spell-Blade sets off on a path of adventure. But what allies, enemies and challenges might one encounter in a fantastical realm fraught with perils? Fill your hand with steel, control your Rage and find out.
==================

Blade of Rage[bladeofrage.com] is a Medieval Fantasy Role Playing Game (RPG) for PC that is currently in production by a '1-Man-Team' Independent Game-Developer.

Though with classical RPG aesthetics, Blade of Rage has its own unique world, story, characters, puzzles and a turn-based battle-system to explore and experience.

For more info on this game project, visit: http://bladeofrage.com

What others have said:

"This is REAL indie stuff - a one-man team throwing everything into making this the game he always wanted to make."
Indie Game News[indiegamenews.com]

"I was quite interested in the game, and I’m always available to help promote games and developer in which I recognize value and potential.

I finally got time to get my hands on the alpha version. I have to say that I really enjoyed what I saw.

This game brings us a new battle system that innovates the traditional genre. It brings us closer to the action. It’s interactive. You participate in the defense, in the offense and get a feeling you’re in the action. It’s more than just stats.

I truly enjoyed the sound track of the game, it suited the game really well and the story elements I had the chance to witness are well written."
Indie Sniffer[indiesniffer.com]

"Am eager to get into it when it's ready. There are just not enough classic/retro-style RPGs for the pc out there."
Ultimate Fantasy Studio[ultimatefantasystudio.com]
===================

Mystix  [author] May 13, 2017 @ 4:21am
@Jornovic : Been several life problems and other priorities past couple of years til now (a couple of deaths of friends of the family, a couple of family deaths last year. I've had some health issues, had an operation, and then some following problems since. My Mom had problems, ongoing, and a few months back had a bad fall. She was just in recently for a test as she might have cancer - waiting on the results for that still. I had to spend a few months re-doing large portions of my game to fix several potentially game-breaking issues, but think I've finally managed to fix it. Hhad computer troubles too, financial troubles, struggling with some depression and burn-out) ; I've haven't given up on this project. I'm still trying to think positive. I just got a new computer yesterday (my old one was dying on me for several months, making it difficult to do much work on it), and now I'm super-broke. I'll try to soon make more progress with development when and as I'm able to.

@4000degreeskelvin : Thanks for your interest. Well, it's still too early to set a price yet, and that may be something that Steam may help suggest to me when my game is ready for release. However, I'm thinking perhaps something around the $10 USD range could be resonable and fair (though it could end up be a little bit more or less).