Greenlight > Games > Rocket City Studios's Workshop
Greenlight is being retired. For more information on how to submit games to steam, refer to this blog post.
This item has been removed from the community because it violates Steam Community & Content Guidelines. It is only visible to you. If you believe your item has been removed by mistake, please contact Steam Support.
This item is incompatible with Greenlight. Please see the instructions page for reasons why this item might not work within Greenlight.
Current visibility: Hidden
This item will only be visible to you, admins, and anyone marked as a creator.
Current visibility: Friends-only
This item will only be visible in searches to you, your friends, and admins.
Second Chance Heroes
Description Discussions2 Announcements24 Comments337 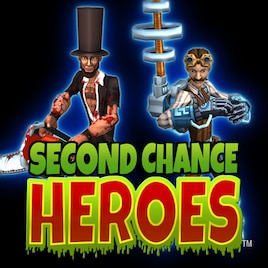 We'll be for sale on Steam on Friday. See http://store.steampowered.com/app/293360 for details.

Thanks everyone for your support!

The mobile version of Second Chance Heroes is now available on iTunes! The cooperative arcade action adventure where you collect and play as clones of historical figures to fight an apocalypse of the absurd is available to play for free to anyone with an iPad (2+) or iPhone (4S+).

The iOS version of Second Chance Heroes is free to play with a premium currency.

Rocket City Studios continues to work hard on the PC and Mac editions of Second Chance Heroes, which will be available as a separate product with its own business model later this year.

Read More
Description
Release date: TBD
Second Chance Heroes[www.2ndchanceheroes.com] is a cooperative arcade action game that takes place in a world overrun by apocalyptic disasters! Made weak by over-exposure to kitten videos, reality TV and ironic photos of bacon, the citizens of the modern world are entirely unprepared when the end of the world arrives! Unable to save ourselves from evil robots, nuclear missiles, sentient fast food, alien invasions and hordes of the undead, our only hope lies in the past. Put together a dream team of cloned heroes drawn from throughout human history and use them to push back the apocalyptic tide! Or don't and just let the zombie chickens eat your face.

In The Press:
Key Features:
Your goal in Second Chance Heroes is to collect and train a small army of historical clones. Each one you add gives you new options as you approach a new level or battle. And remember, with character tag teaming you can always have two clones on hand in any given situation.

why is this not on steam yet
wuki

Surreal_Wintle Mar 9, 2015 @ 2:23pm
I see you are releasing the game you have Developed/Published! May i say that i hope BEST luck for you! Thank you -BaconCat

Second Chance Heroes has been Greenlit and is now listed in the Steam store. For the latest information, purchase options, and discussions for Second Chance Heroes, please see it on the Steam Store or in the Steam Community.
Visit Store Page
For more details Visit Community Hub
For latest discussions
If you really, really want to, you can continue to the Greenlight page. Information on this page may be out of date, since all the action has moved to the areas noted above.