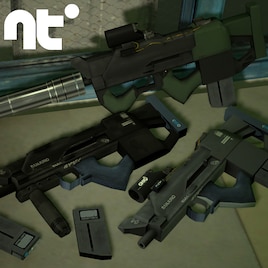 Kally
Offline
See all 1789 collections (some may be hidden)

This item has been added to your Subscriptions. Some games will require you to relaunch them before the item will be downloaded.
Description
This is a pack of bodygrouped props of all of the weapons from Neotokyo, a Half Life 2 mod.

This is a re-release of a pack i released almost exactly one year ago, done since i never uploaded the original pack to the workshop and a recent update to the Neotokyo mod inspired me to update my pack and apply the things i've learned since i did the first version to make them even better.

Also included are revamped and improved versions of the original, Pre-2013 update ZR68C and ZR68L rifles, with accompanying magazine props.

All weapons have bodygroups, so the Bodygroup tool is highly recommended to get the most out of them, and almost all of them are compatible with the Joint tool for more detailed posing, with everything down to the sling loops on some rifles rigged so they can be posed using the Joint tool.

The newer ZR68C and ZR68L models have an alternate skin with color tool compatibility, if you really need a gun with flamboyant pink rail covers, or just want a color other than tan.

Credits list:
STUDIO RADI-8 and all other members of the Neotokyo mod team for the mod and the weapons.
Taggart for testing and for providing me with some pictures.
And myself (Kali) for bodygrouping them, fixing things, and making them how they are.

The police guys in the screenshots weren't finished or released and were lost in a hard drive crash. They're gone forever, don't ask for them.
< >
96 Comments

NOVSK CAPITAN PASTA BASE Apr 1 @ 5:26pm
heyo, could i use these models so that i can make them into useable arccw weapons?

dead Mar 24 @ 2:15pm
Actually have them scripted and animated for sweps, just need to release them.

Kally  [author] Mar 24 @ 9:55am
I don't make scripted weapons, but I've always been happy for those who do to use my models to make them.

But these models have been on the workshop for nearly 8 years now, so if nobody's made SWEPs out of them yet then I doubt anyone will.

Maxigamer Mar 23 @ 9:46pm
all these props are for a possble full weapon pack in the future?