Store Page
Arma 3>  Workshop > Peppermantwist's Workshop
This item has been removed from the community because it violates Steam Community & Content Guidelines. It is only visible to you. If you believe your item has been removed by mistake, please contact Steam Support.
This item is incompatible with Arma 3. Please see the instructions page for reasons why this item might not work within Arma 3.
Current visibility: Hidden
This item will only be visible to you, admins, and anyone marked as a creator.
Current visibility: Friends-only
This item will only be visible in searches to you, your friends, and admins. 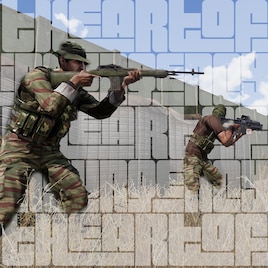 Peppermantwist
Online
See all 5 collections (some may be hidden)

This item has been added to your Subscriptions. Some games will require you to relaunch them before the item will be downloaded.
Description
Organize a local armed resistance against the AAF Junta and their CSAT allies from the ground up and combat enemy forces in different theaters of war throughout Altis. Complete various and challenging missions, capture startegic locations, earn money and use your resources wisely to push the oppressive regime into the sea.

Players are completely free to engage individual opeations in any way they see fit and many missions can be completed by various means. Combat can occur in the air on land or sea. The more successful individual players are, the more they will earn or capture money, which can be used to purchase better equipment and vehicles. Everything from a cheap surplus AKM to a 3rd generation fighter jet is purchasable, if one can afford it. Still, this missions is played as a guerilla, so although all sorts of hardware can be bought, expect to be limited to modest equipment that will challenge your tactical and strategic creativity for quite a while and force you to make ends meet with few resources.

The mission needs to be launched as a multiplayer mission but can be played solo with recruitable AI, together with other players or a mix-match of both, OPFOR is entirely controled by AI.

The mission seeks to make the most out of the vanilla assets and resources available, it does not require any mods and can be played without any DLC whatsoever.

This mission is losely based on Ahoyworld's "Invade & Annex" but has been enitrely overhauled and modified.

Story:
After the Akhanteros putsch of 2026, guerilla forces began an armed resistance against the putschist forces, but continuously were pushed further north into the remote mountains. By 2028 two precursors of the FIA, the Altian People's Resistance Forces (APRF) and the Altian Republican Militia (ARM) are in a fully fledged civil war against the AAF, CSAT and guerillas supporting the military junta, but their alliance is far from stable as well.

The mission features:
-A wide range of randomly selected, and semi-randomly generated missions that combine replay value with realistic object placement and compositions.
-Two playable factions that can either work independently, cooperate or fight each other.
-a simple trading and reward system.
-a wide range of specially customized vehicles, units and equipment to fit the asymetrical character of the mission.
-a ticket system that takes strategic losses and successes into account.
-recruitable AI with semi-randomly generated faction-specific loadouts.-
-Simulated logistics for reinforcements (infiltration through FOBs)
-Simulated changes in enemy strength, faction and equipment according to OPFOR tickets and mission progression.

Bailing_Out Jan 3, 2019 @ 10:08pm
That was all my fault. I do not have some of the DLC so some of the vehicles will not allow me in. I should have known that was the problem when I noticed I hadn't seen some of them in the past.

Peppermantwist  [author] Jan 3, 2019 @ 2:11am
You should be able to find them under your intel, if not let me know and I will see where the problem is. To directly answer the question at hand though: vehicle unlock of owned vehicles is on the Y key

Bailing_Out Dec 29, 2018 @ 12:43am
Where are these mission notes. I assume those notes will tell me how to enter vehicles that is different from the regular method.I have missed something, I cannot find a handbook or mission notes and I cannot for the life of me enter a vehicle.

To get gear and clothing walk up to the "target" and hit space. This is not obvious as there is nothing that highlights - unlike squad recruiting that shows a highlighted text.

Who knows there may be other things hidden. I spent a half hour walking around hitting space bar on everything just in case.

Will definitely come back to this and see how it plays out. Looks like a pretty cool mission.

geozero Oct 9, 2018 @ 6:53pm
My player starts out in underwear. Can't locate a crate to even get clothes. I can recruit soldiers but can't find my pants.