Store Page
Besiege>  Workshop > Ross P.'s Workshop
This item has been removed from the community because it violates Steam Community & Content Guidelines. It is only visible to you. If you believe your item has been removed by mistake, please contact Steam Support.
This item is incompatible with Besiege. Please see the instructions page for reasons why this item might not work within Besiege.
Current visibility: Hidden
This item will only be visible to you, admins, and anyone marked as a creator.
Current visibility: Friends-only
This item will only be visible in searches to you, your friends, and admins. 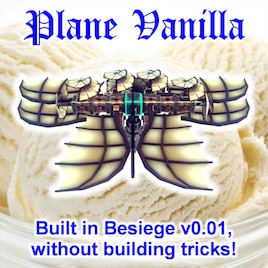 Ross P.
Online
See all 8 collections created by Ross P. and other people (some may be hidden)

This item has been added to your Subscriptions. Some games will require you to relaunch them before the item will be downloaded.
In 2 collections by Ross P.
Ross' Vanilla Builds

4 items
Description
Since v0.70 can't read v0.01 machine files correctly, I saved Plane Vanilla in v0.05 and updated to that version here. You can read my bug report in the link below. If you're using a pre-workshop version of Besiege, you can directly download the original Plane Vanilla built in v0.01 at the other link below. Now on to the original description.
http://forum.spiderlinggames.co.uk/index.php?posts/34650/
http://besiegedownloads.com/machine/70132

I set out to build the best aircraft I could with the very first version of Besiege. The result was a plane with surprisingly good low-speed agility. Also, it can break Tolbrynd brick and keep flying if you hit with the wings. (If you hit with the middle of the plane it tends to break.)

In the demo video, I build the plane, and mention some of the challenges of designing an aircraft in v0.01. Then I demo the plane in a few zones, and a couple of Shade's maps.

The unconventional control scheme might seem strange at first, but once you get the hang of it, I think you'll find the handling simple and intuitive. The controls are all actively powered rather than passively using aerodynamics, so you have a lot of control even at very low speed.

The plane starts perched on a bomb, so you'll want to take off right away with both forward and lift. It tends to pitch down slowly as you go, and you correct as desired using F and H for lift. The one thing that could take some getting used to, is that turning also causes you to pitch up, so you might have to plan for that if your course doesn't offer much spare room.

I designed this plane for the user to drop the bomb before landing, but as I show in the video, you can land on the bomb if you like to live dangerously. Or you can delete the bomb and grabber and put a cannon there instead.
< >
11 Comments

lazykangaroo Aug 9, 2018 @ 8:36am
easy to control once you get the key bindings right also very durable able to take damage and keep flying large amounts of lift and speed. amazing build it leaves me kicking myself for not thinking of it before. over all it's fantastic

Grey Wolf Jack Aug 8, 2018 @ 2:30am
100% Vanilla is the only way! It maintains the game's challenging aspects to keep things interesting, it also keeps things simple, and it looks better because it stays true to the medieval aesthetic.

Mods too often break the game's carefully balanced physics and unique medieval aesthetics.. Meaning mods nullify the entire reason I play Besiege. The more hours I play, the less I understand mods... and I had even hoped the reverse would be true, but no. I still can't stand mods!

Ross P.  [author] Aug 6, 2018 @ 2:20am
Thanks for the comments, everybody! JIM BOB, I'm especially glad you mentioned the durability of the plane, because I was wishing I had demonstrated that better in the video. Normally I wait before posting videos so I have time to think of anything else I might want to add, but I was in a hurry to get this one out before Draegast's 200th Besiege episode.

JIM BOB Aug 5, 2018 @ 10:59pm
The controls are very simple, but I still had to play with it a little to get use to it. But once I got into my groove, its so satisfying to fly and mess around with. Surprisingly durable even though it only has wooden blocks, fans and wings. I've bounced it off the ground several times and nothing fell off, also clipped the wings on somethings and there wasn't any damage. The only issue I had while flying was the timing for dropping the bomb, which isn't something to do with the design. In the end I have commend you on how simple, yet ingenuitive the design is. Definitely deserves 5 stars and front page.