Greenlight > Games > chaosavy's Workshop
Greenlight is being retired. For more information on how to submit games to steam, refer to this blog post.
This item has been removed from the community because it violates Steam Community & Content Guidelines. It is only visible to you. If you believe your item has been removed by mistake, please contact Steam Support.
This item is incompatible with Greenlight. Please see the instructions page for reasons why this item might not work within Greenlight.
Current visibility: Hidden
This item will only be visible to you, admins, and anyone marked as a creator.
Current visibility: Friends-only
This item will only be visible in searches to you, your friends, and admins.
Void Destroyer
Description Discussions4 Announcements14 Comments449 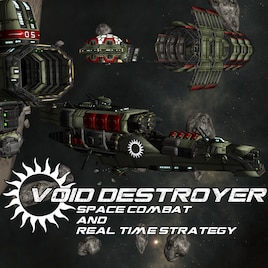 chaosavy
Offline
See all 54 collections (some may be hidden)
Kickstarter

View Void Destroyer in the store

For those interested - check out the store page for new trailers, screen shots, discussions, and info:

Wanted to do a quick update here on Steam - the first Batch of Steam Keys have been delivered to Kickstarter Beta backers - so Early Access should soon follow for those interested.

Read More
Description
Release date: Fourth quarter 2013
Void Destroyer is a independent space combat simulator and real time strategy hybrid. Void Destroyer is a single player game, it is heavily influenced by classic space sims with my own personal touches as well as feedback from players. It is the game of my dreams that I've spent the past 4 years developing.

Why a hybrid?
There are many space simulations out there, but to me they always lacked that additional amount of control I wanted. Yes I want to be the pilot, but I also want to be the commander. Adding real time strategy elements fulfills that wish for me and I hope for you as well. 2D maps/control interfaces in space sims always seemed to be too limited. Thinking about this flaw in most games, I added the 3D tactical mode, which allows real time strategy genre like controls.

Players have found similarities to the game Battlezone, and some have used the phrase - Fly Homeworld.

In Void Destroyer you aren't a lowly pilot, you are in command yet still on the front lines.

What is the game setting?
In the outer edges of the Oort cloud, a Sun Gate links solar systems light years apart. The gate quickly becomes its own hub of activity as mining factions drag nearby asteroids into the gate's orbit. Hollowed asteroids become bases, homes to many. When riches are discovered, peace becomes cheap.

As a former General, you can write your own ticket. You chose to spend your retirement as a test pilot working for the local military detachment.

What is the core game play like?
In Void Destroyer you take on the role of a retired General once again leading the charge. Build defenses, infrastructure and ships. Secure resources, find allies and conquer enemies. From the Tactical interface of the command ship you lead your forces and pilot craft. Make peace by unleashing war.

What else makes Void Destroyer unique?
I always enjoyed a great variety of games, I have combined many different ways of interacting with the game universe. Void Destroyer gives the player unique options on how to play. You can choose one or all of the options to suit your game style or the situation in game.

Custom Game Engine:
The game engine running Void Destroyer has been developed in house (literally in my house) and with open source libraries - the game engine doesn't have any limits that are sometimes an unfortunate reality when using commercial "off the shelf" game engines.

The ways of interacting with the game world and features:
Space sim flight model:
Void Destroyer uses a newtonian flight model - meaning that momentum isn't affected by rotation and there is no drag or friction. Ships are capable of compensating for drift automatically and the pilot is able to turn off this compensation to turn independent of momentum. I've put in a lot of effort for ship flight being a joy - meaning - there is drift. It is something to both be wary of and use during combat and maneuvering. Due to the variety of ships and ship classes you can pilot - a nimble drone fighter will be able to compensate for drift much faster than a cruiser.

Realism? Hardcore? Casual?
Combat in Void Destroyer is designed to be action packed and up close and relatively personal. Combat happens in visual range, you won't be shooting at dots.

There are a lot of keyboard commands for players that want them, however the play style is forgiving due to having control over more than one ship. If a small fighter you are remotely piloting is destroyed, you either hop into another or return to piloting the command ship which isn't as easily destroyed.

Although the flight model is newtonian - small ships compensate fairly quickly and have the use of afterburners to change direction even quicker when needed.

Modding support:
Void Destroyer seeks to be among the most mod friendly games out there. I've spent a great deal of effort creating a game engine that is data driven. Object characteristics, maps, missions, dialog, even the scenes that appear on the game's main menu are moddable. As little as possible is hard coded. Modding can be accomplished via a process that is as easy as editing text files.

What is the current state of the game?
The game is in late alpha. Most of the release features are in, and the main focus is on polish, finishing the story line and getting and implementing feedback from players. The current released version is the demo release in terms of content (ships, story line etc). You can expect more ships, more bases, improved settings/maps, more variety of locations and a full story line from the final product.


Destroyer = type of a class of naval ship

+ some other meaning to me

Well there you have it!

Starbuck Jan 2, 2014 @ 5:41am
Looks like a good game to me. However, I can never understand why in space games that game developers refer to "light ships" and "heavy ships"? Space is weightless and therefore there is no weight so all ships big or small would surely travel at the same speed (depending on the onboard thrusters). Looks good though and will definately look at it.

Void Destroyer has been Greenlit and is now listed in the Steam store. For the latest information, purchase options, and discussions for Void Destroyer, please see it on the Steam Store or in the Steam Community.
Visit Store Page
For more details Visit Community Hub
For latest discussions
If you really, really want to, you can continue to the Greenlight page. Information on this page may be out of date, since all the action has moved to the areas noted above.