Store Page
Transport Fever>  Workshop > NA4U's Workshop
This item has been removed from the community because it violates Steam Community & Content Guidelines. It is only visible to you. If you believe your item has been removed by mistake, please contact Steam Support.
This item is incompatible with Transport Fever. Please see the instructions page for reasons why this item might not work within Transport Fever.
Current visibility: Hidden
This item will only be visible to you, admins, and anyone marked as a creator.
Current visibility: Friends-only
This item will only be visible in searches to you, your friends, and admins. 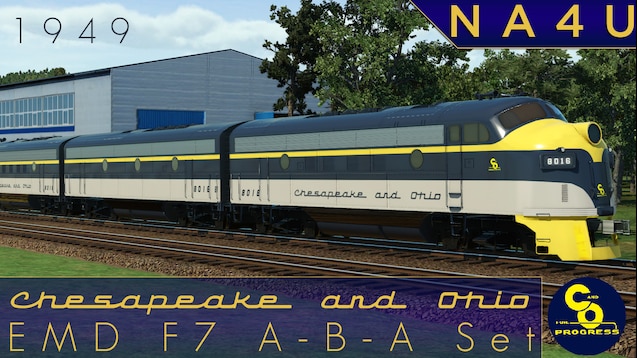 NA4U
Offline
See all 88 collections (some may be hidden)

This item has been added to your Subscriptions. Some games will require you to relaunch them before the item will be downloaded.
Description
'Covered Wagons', or 'The diesel that did it', the F7 is America's most recognizable locomotive by a country mile.

Chesapeake & Ohio - #8016 was used in scenic excursion service on the Potomac Eagle scenic railway in Romney, WV. The last appearance this locomotive made in the C&O colors was at the Streamliners Event in Spencer, NC where over 20 Streamlined Diesels and one very special steam locomotive were put on display for the public.

After the event, it was announced that the C&O 8016 F3 diesel, owned by the Chesapeake & Ohio historical society had sold the locomotive to a private buyer. It remained a mystery until October 2017 where the 8016 went.

CSX had unveiled it painted the locomotive in the Clinchfield grey paint scheme, erasing the last remaining Perre Marquette style C&O paint scheme F unit from history. It was a fictional scheme as that locomotive never officially wore that scheme, but it was pleasant to the eye.

CSX later unveiled that the Clinchfield 800 would be the star for its Santa Train going forward. Thus an end of an era for C&O 8016.

This skin is to honor the memory of this diesel I had growing up as a kid when my late father took me to ride behind it in the mid 90's. I hope everyone enjoys this locomotive skin as much as I have had making it.

If you like my skins, please consider a donation, I do this in my spare time and every little bit helps me continue to do more.

Disclaimer: By downloading this mod/skin you agree to not share any modifications you make without permission from NoAchievement4U, the owner of the original content. I am not responsible for any damage/problems this mod causes.
< >
16 Comments