Store Page
Arma 3>  Workshop > (4SFG) jarrad96's Workshop
This item has been removed from the community because it violates Steam Community & Content Guidelines. It is only visible to you. If you believe your item has been removed by mistake, please contact Steam Support.
This item is incompatible with Arma 3. Please see the instructions page for reasons why this item might not work within Arma 3.
Current visibility: Hidden
This item will only be visible to you, admins, and anyone marked as a creator.
Current visibility: Friends-only
This item will only be visible in searches to you, your friends, and admins. 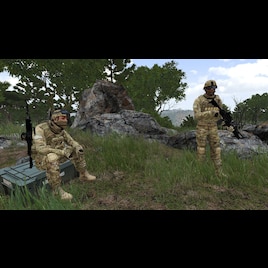 This item has been added to your Subscriptions. Some games will require you to relaunch them before the item will be downloaded.
In 1 collection by (4SFG) jarrad96
Arma 3 Faction Overhauls

28 items
Description
This mod is a total replacement of the North Atlantic Treaty Organisation units, bringing them more in line with modern day equipment, weapons and uniforms.
It works in the official Arma 3 Campaign and custom scenarios that use the NATO faction will be using the new faction as well.

NATO soldiers have been changed into a force resembling the United States Army, with more comtemporary weapons such as the M4A1 Carbine replacing the MX rifle. The standard uniform is Multicam OCP for all infantry units, with most units having IOTV vests and OCP ACH combat helmets.

The M249 SAW is the standard autorifleman weapon, giving the individual fireteams saturation fire at longer ranges. Marksman carry an M14 or ACOG equipped M4A1, and the Army forces as a whole are armed with mostly M4A1 Carbines. The M240 Bravo is in the faction as a medium machinegun asset, and the M590 Mossberg shotgun is added for breaching and CQC operations. The M4 carbine with the burst trigger group is used by units that are not combat orientated, such as helicopter pilots and vehicle crewman.
The standard AT weapon is the AT4 launcher, but SMAAW and Stinger teams are available as heavy weapon assets replacing the Titan AT/AA. The standard sidearm for all regular Marine forces is the Berreta M9.

The Recon SF units have been loosely based on the Army Special Forces and are equipped differently to the standard line infantry units.
They carry the more compact Daniel Defence Mk18 or M4A1 Block 2 rifle's loaded with Mk316 SOST rounds as standard and have the Mk11 as a DMR, with support from a M249 machinegun. UAV and JTAC (Joint Terminal Attack Controlers) are intergrated into the SF ground teams to provide CAS and reconnaissance if needed.
They are wearing Multicam Crye G3 uniforms and MBAV vests. Standard sidearms for the SF forces is the Glock 17.

Combat Patrol squads are similar to the Infantry forces in Multicam uniforms and vests, but they are equipped primarily with M4A1's with supressors for steath missions and have the M14 EBR, M249 SAW's and M240's Bravo's for support.

The CTRG Forces, including Captain Miller, have also been turned into SOF units, carrying slightly more advanced weapons compared to the normal Raider forces. They have the M2010 MSR for sniper support, Mk11's and have more Mk18's instead of M4A1 Block 2's, as it's a more compact rifle.
They are wearing Multicam Crye G3 uniforms and MBAV vests.

NATO Forces retain all their original support assets, from Merkava MBT's, Oshkosh M-ATV MRAPs and many other ground vehicles, with air support from AH-6 and MH-6's, RAH-66 Comanches and CH-47 Chinooks.
I am NOT able to add RHS vehicles into the main game campaign, it breaks missions. If you want to you can easily just use normal RHS vehicles for your own missions instead.

The faction is fully functioning as a total campaign replacement, but it can occasionally have an error where some things are not replaced in the campaign- Usually it's Kerry's unique helmet, sometimes a NATO unit of some kind in your squad, and cutscenes might revert the gear.

Start on Mission 2 of the main campaign,skipping Drawdown 2035, as there is a bug with the MH6 during the first cutscene.

The Rifleman with MAAWS Rifleman (Light AT) added in the Tanks DLC I cannot replace right now, just avoid using him.

https://forums.bistudio.com/topic/200555-special-forces-factions/
Discussion page and updates/ WIP logs will be posted here before they hit the Workshop.
< >
48 Comments

ArchangelSVK Apr 9 @ 1:26am
Ye. I cant enter helis. Hope this gets fixed. Any ideas why this happens?

ArchangelSVK Apr 9 @ 1:17am
There are bugs with the campaign with this one. In the prologue, when I am supposed to go to the bombed convoy in a helicopter, me and Adams are still on top of the building and the heli is just flying away. Then it gives me a mission failed...