Greenlight > Games > alexius's Workshop
Greenlight is being retired. For more information on how to submit games to steam, refer to this blog post.
This item has been removed from the community because it violates Steam Community & Content Guidelines. It is only visible to you. If you believe your item has been removed by mistake, please contact Steam Support.
This item is incompatible with Greenlight. Please see the instructions page for reasons why this item might not work within Greenlight.
Current visibility: Hidden
This item will only be visible to you, admins, and anyone marked as a creator.
Current visibility: Friends-only
This item will only be visible in searches to you, your friends, and admins.
Effing Dead
Description Discussions1 Announcements6 Comments124 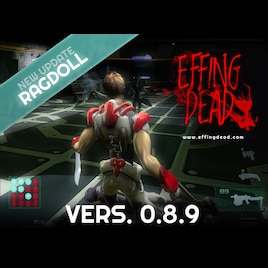 alexius
Offline
See all 16 collections (some may be hidden)
Recent Announcements View All (6)
Xmas surprise! EFFING DEAD has been GREENLIT!
December 29, 2014 - mrKaizen

...and when you think you have opened all the gifts under the tree, another one jumps out!
SO, finally, EFFING DEAD has been GREENLIT and we must of course say THANK YOU to ALL OF YOU!

We are now full (night) time on THE BODY CHANGER so EFFING DEAD must wait a bit more but we have some ideas. ;)

..so wait for future news or you could follow us on FACEBOOK[www.facebook.com] or on TWITTER and please, as usual, tell your friends!
It's nice to be part of this little but GREAT INDIE GAME COMMUNITY ! -_^

We are glad to announce that EFFING DEAD[www.desura.com] is also on Desura since a week and it looks like people are enjoying it.

You can visit the page right now, download and play the free beta and maybe support us:
http://www.desura.com/games/effing-dead

Some players reviews :
«Felt immediately like I was playing a Dead Space or a Resident Evil, and that's definitely not a bad thing.»
«Amazing game with an incredible and spooky atmosphere, it has a lot of potential!»
«I put 10 because I've played it and the truth that I found it a really fun game, well, just that» (translated )

...and don't forget that there you can find also EFFING DEAD's "son", THE BODY CHANGER[www.desura.com]: an action adventure with survival elements and an original multi character game mechanic.

With a current AVARAGE RATING of 8.4/10 aren't you curious to take a look?
Follow the link:
http://www.desura.com/games/the-body-changer
-_^ We think you will like it too!

Read More
Description
Release date: First quarter 2014
EFFING DEAD is an indie-game by TheShortAndTheTall: a small indie-team made of two guys.
Our game is a survival action-game that was just inspired by RE4 but more sci-fi and with some new game mechanics.

THE GAME
Future
When water becomes the most important and rare resource on Earth, the company NO-END decide to try a completely new solution: space research for new resurgences.
Big spaceships filled of completely reliable research clones were sent into the galaxy, for the most ambitious travel ever.

Star System GLeESI, planet GLeESi-d, satellite S/GLeESi-d-HOPE-12: one of the most important celestial bodies found. Not so distant, very similar to our Planet and, most of all, full of clean water.
There is only a problem: by weeks no signal from the station reached us.
It's not clear what happened: no alerts, no malfunction, no emergency alarms. Only silence.

When all the contacts with the satellite S/GLeESi-d-HOPE-12 are lost, is up to you to take control from remote of the last defence clone on the station.

Find out what's going on, fix any problem and reactivate the main signal with Earth.

But remember to take care of his HEALTH and of the CONNECTION with him: damage disturb and alter the camera signal, plus you need to worry about connections shields which must be removed or deactivated.

Use the special V-Blade to perform SPECIAL MOVES and FINISH THE ENEMIES, do BARREL ROOLS to avoid enemies grabs and take advantage of the clone SPECIAL ABILITY: aims objects to interact with station terminals, activate machines and take control of different type of sensors.

PLATFORM
EFFING DEAD will be release primarily for win-PC but we are absolutely interested to bring it to Linux and Mac - and maybe a different version on phone and mobile device, but after the end of the desktop version.

FEATURE
If you are curious you can go to {LINK REMOVED}our Site for more info about this project.
< >
124 Comments

WroughtBot Aug 21, 2014 @ 8:12am
It looks cool, but I personally think it has a way to go before it's done. But the puzzle solving looks awesome. Yes

Espurr Aug 8, 2014 @ 9:48am
I played the little demo from their website, and it was awesome. I hope this gets greenlighted.