Store Page
Transport Fever>  Workshop > SoftwareSimian's Workshop
This item has been removed from the community because it violates Steam Community & Content Guidelines. It is only visible to you. If you believe your item has been removed by mistake, please contact Steam Support.
This item is incompatible with Transport Fever. Please see the instructions page for reasons why this item might not work within Transport Fever.
Current visibility: Hidden
This item will only be visible to you, admins, and anyone marked as a creator.
Current visibility: Friends-only
This item will only be visible in searches to you, your friends, and admins. 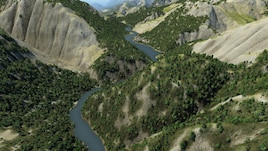 SoftwareSimian
Offline
See all 47 collections (some may be hidden)

This item has been added to your Subscriptions. Some games will require you to relaunch them before the item will be downloaded.
Description
Fraser & Thompson Canyons, British Columbia, Canada (7.6k x 2k)

This map will not be for everyone.

It is large, with tortuously high mountains, few towns, sparse industry, and is only for those interested in replicating the build-along-both-sides-of-the-canyon engineering of the real Fraser and Thompson Canyon. I might suggest building single-track up one side of the canyon and down the other (historically the Canadian Pacific Railway was built through here ~1885 and had first choice of which side of the canyon looked easiest; the Canadian Northern Railway followed ~1905 and had to choose the second-best route from what space was left, which usually (but not always) meant the other side of the river.

Map covers the area from Hope to Lytton on the Fraser River, and from Lytton to Ashcroft on the Thompson River. Scale is about 1:5 (real world ~150km, in-game about 30km). Elevation has been adjusted slightly to make the river flat (it actually drops about 50m from Ashcroft to Hope) to allow water to be present in all the river and prevent the easy build up the flat valley floor.

Industries are carefully placed on the map. It is possible to connect them all, although not every industry may be able to supply every town due to time/distance/budget constraints. The game calculates ticket price based on the speed of the slowest locomotive on the line, and budget is based on linear distance between stations (not the actual path the train/truck takes). This map will necessitate very winding routes along valleys, but that's fine. However, you may want to use the slowest viable locomotive rather than the fastest for freight. If your cargo route shuts down, your locomotive is too fast (and therefore expensive).

Recommended mods for this map:
* Not a mod, but suggested to select European environment instead of American; in real life this is a green place, not a desert
* Clean Cliffs (prevents unsightly rocks all over the steep mountains)
* Vegetation Increase Higher Treeline this region is covered in trees in real life
* Left/Right Cargo Harbor (some water routes are possible, but river is narrow)
* Flexible Stations + Bigger Train Stations to give you the most flexibility to fit stations to the very limited real estate near each town (including complex curving, sloping, and more choices in platform length).
* Flexible Industries to give more choices on road connections to, and/or truck stops inside, industries where surrounding terrain is close and limiting.
* Locomotive Speed Adjuster allows you to limit locomotive maximum speed, useful for enabling longer cargo chains in later years.
< >
83 Comments

SoftwareSimian  [author] Dec 19, 2019 @ 10:15am
I will eventually be porting all my maps to TpF2. Unfortunately they changed the map system significantly and it's not the trivial copy-over than I had assumed it would be. There are currently issues with heightmaps and non-standard-aspect-ratio maps. I will post an updated version when I can.

SoftwareSimian  [author] Nov 1, 2019 @ 8:08pm
If you have modified values in base_config (or have mods that adjust landscape properties) it's possible the water level is set to something other than where it should be (100m default, and scaled from there according to this particular map.lua)

NA4U Nov 1, 2019 @ 4:47pm
I just downloaded this myself and I cannot get it generate any water. in fact, none of my maps are generating water now. I followed the instructions above and have all the dependency mods, but when the game generates the map, it looks nothing like the map in the screenshots above.

SoftwareSimian  [author] Aug 17, 2019 @ 8:28am
@DREAM: The stones do not come from the map, they're automatically generated by the game. Please see the "Clean Cliffs" mod linked above which I already suggested you should use which will prevent them from generating.

Zergos Aug 16, 2019 @ 9:01am
Map's great. But small stones spoil the view. It looks very terrible when there are a lot of stones on the hills. Please remove the stones! Thanks.

Lunatic Aug 6, 2019 @ 8:08am
I have to admit, this is an issue with Transport fever, this is a good challenge however the limitation of the route line distance is just a bit of a deal breaker. I'm not keen on using a speed limiter either, there are sections where I have managed to get the track speed up to 120 and for a fair distance. It's a beautiful map but I will have to find something else, thank you.

Eval Jul 30, 2019 @ 12:49am
Can't for the life of me to get this map to work have only got mods listed installed bigger map size setup getting the same as Lunatic's picture no water really high mountains.
< >