Greenlight > Games > Que-ee's Workshop
Greenlight is being retired. For more information on how to submit games to steam, refer to this blog post.
This item has been removed from the community because it violates Steam Community & Content Guidelines. It is only visible to you. If you believe your item has been removed by mistake, please contact Steam Support.
This item is incompatible with Greenlight. Please see the instructions page for reasons why this item might not work within Greenlight.
Current visibility: Hidden
This item will only be visible to you, admins, and anyone marked as a creator.
Current visibility: Friends-only
This item will only be visible in searches to you, your friends, and admins.
Shadow of the Eternals
Description Discussions12 Announcements15 Comments1448 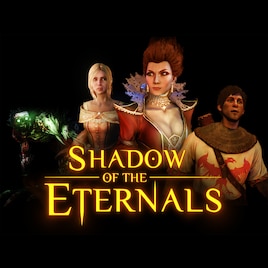 Yes it's still coming! We always appreciate people wanting the game but also know that it's a frustrating wait - and you guys are awesome for sticking around with us! The kickstarter failed so we had to go a different direction and start a new business with a new business model, these things take time but we're able to do a lot more with the new company and have a lot more options. We obviously had a less than pleasant experience with some unethical press during the KickStarter so we're making sure we have all our ducks in a row before we talk much more about SOTE, but it IS coming. We're recording a video podcast tonight which will be released in the next day or so where we'll talk a little more about it.

Over $290,000 raised, over 5,600 backers. It has been an exciting ride and we wanted to thank everyone who helped us get this far - we appreciate it very much.

In today’s update we are proud to release a short peek video of Bathory’s Csejthe Castle in 1942.

A secret Nazi research group founded on July 1, 1935, to investigate the archaeological and cultural history of the Aryan race with an avid interest in the occult.


We would also like to call out some Kickstarters that we think are cool and worth checking out:

Just a reminder to be there for our Cheers or Tears - Kickstarter twitchtv live stream at 9pm EDT - 12am EDT.

Read More
Description
Release date: Q3 3333
Shadow of the Eternals is a third-person action/adventure game steeped in psychological horror, created in collaboration with it's fans!
Darkness Has Returned
A psychological horror game, Shadow of the Eternals is the spiritual successor to Eternal Darkness: Sanity’s Requiem, being developed by the original creators of the popular and critically acclaimed classic. Featuring an eclectic cast of heroes and villains, Shadow of the Eternals will span thousands of years of history. Players’ perception of reality will be shattered as they try to balance the mechanics of combat, magick, and exploration as they progress through the adventure.

Shadow of the Eternals is:

'A Dream Within A Dream'
The story begins as Detective Paul Becker is called to Pleasant View Hospital, the site of one of the bloodiest gang massacres in Louisiana state history. The massacre is survived by two individuals who seemingly have no recollection about who they are or what has transpired -- one a suave businessman, and the other a hardened, rogue-like biker. Both men have lost all memory of who they are -- and yet they are compelled to kill each other.

Through Becker’s interrogation of the suspects, a story unfolds that is set in Hungary 1610 AD at Csejthe Castle – home to the noblewoman Erzsébet Báthory. Báthory is a notorious serial killer; torturing and killing as many as 400 young women in her obsessive quest to retain her youth. You play the role of Báthory’s handmaiden and lover Klára, who is being blackmailed by the authorities into gathering information about a missing nobleman’s daughter.

Events are soon set in motion that will change Klára's life forever.

The Gameplay
The player uses the mechanics of combat, magick, and exploration to progress through the game and uncover its mysteries. Each playable character will have different levels of proficiency in these mechanics and will tackle situations very differently. Their level of sanity affects their ability (both positive and negative) in all these mechanics.

The Cast
Paul Becker
Confronting the violent chaos surrounding the bloodiest massacre in Louisiana state history, Detective Paul Becker is faced with a bizarre mystery that threatens far more than the peace of Pleasant Hill, and casts him headlong into the darkest abysses of his own psyche. The shadows emerging from the carnage only force more questions, particularly about himself and the loss of his wife. Paul Becker will be voiced by the incredibly talented David Hayter. David was the voice of Solid Snake in the critically acclaimed Metal Gear Solid series and also did voice acting in Eternal Darkness: Sanity's Requiem.

Klára Rusznyák
Klára is a young woman escaping a brutally transient life as a ♥♥♥♥♥, torn between the enticing arms of her lover and mistress, Erzsébet Báthory - and an executioner's axe. Blackmailed by the authorities, Klára attempts to uncover the fate of a missing nobleman's daughter within Csejthe Castle, and offer up the Countess' secrets in order to end her nightmarish reign.

Erzsébet Báthory, The Blood Countess
Driven by her obsession with everlasting youth and beauty, mass murderer and noblewoman Countess Erzsébet Báthory has sacrificed over 400 young women to further her knowledge of the occult. But her despicable acts have been pushed aside for a new obsession – her growing love for the handmaiden Klára.

In the Spirit of Darkness
Eternal Darkness: Sanity’s Requiem was one of the highest rated games on the Nintendo GameCube with a metacritic of 92%. For years, fans have requested a follow up, and with Shadow of the The Eternals, that is exactly what Precursor Games is prepared to do with your help.

To make this game the best it can be, we have one core focus: community created content. We will be working with you and the rest of the community to create this game. Have you ever thought that you could improve a game that you loved, or contribute to it in some way so that others could enjoy it more? Look no further, as that is what has already been happening with Shadow of the Eternals. Join the Order, share you ideas, get your name in the credits and experience what it’s like to be working on a video game.

With the drastic change of the video game industry in the past decade, crowdfunding is the only avenue to help create a game similar to Eternal Darkness. When we created the first game, we wanted to do something truly different in the horror genre, and with our fans and contributors we will do something exciting once again. Help us make history and create Shadow of the Eternals, a spiritual successor to a game that truly deserves a follow-up.

About Quantum Entanglement Entertainment, Inc
Quantum Entanglement Entertainment (“Que-ee”) is a unique entertainment company that creates Television, Games, and Film all under one umbrella. Que-ee was established on the belief that all three media are converging and that their independent status is a thing of the past. Each of Que-ee’s co-founders are experts in their fields and specialize in Television, Game and Film Production.

Ken Masters Feb 25, 2017 @ 12:20am
Ok, so the game was greenlit but the game failed to garner money twice. The first time in a very confusing kickstarter/self-crowdfunding move that had no hope and the second time with a kickstarter that came at a bad time. I feel bad for this game and now I want it to happen more than ever.

DePadova Feb 4, 2016 @ 5:48pm
The game wont come out because Denis Dyack is a piece of shit who treats his employees like crap and is involved in multiple lawsuits. He can't run a company to save his life.