Store Page
Transport Fever>  Workshop > Maverick18's Workshop
This item has been removed from the community because it violates Steam Community & Content Guidelines. It is only visible to you. If you believe your item has been removed by mistake, please contact Steam Support.
This item is incompatible with Transport Fever. Please see the instructions page for reasons why this item might not work within Transport Fever.
Current visibility: Hidden
This item will only be visible to you, admins, and anyone marked as a creator.
Current visibility: Friends-only
This item will only be visible in searches to you, your friends, and admins. 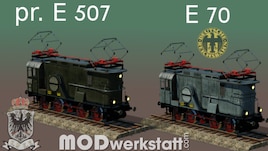 Maverick18
Online
See all 80 collections (some may be hidden)

This item has been added to your Subscriptions. Some games will require you to relaunch them before the item will be downloaded.
Description
In 1910, the Prussian State Railway ordered ten locomotives with the wheel arrangement D for the covering of local freight trains for the network of Berlin urban, ring and suburban railways intended for electrification. Until the outbreak of the First World War, the contracted companies BMAG and MSW delivered two locomotives with the designation EG 507 and EG 508. Due to the First World War, no further locomotives could be delivered. The KPEV used the locomotives until 1914 on the Dessau-Bitterfeld line. After the cessation of electrical operation as a result of the war, they were transferred to Silesia for operation on the route Niedersalzbrunn -Halbstadt in freight traffic. The locomotive was there only a makeshift solution, since the ordered locomotives (Prussian EC 538abc to EG 549abc (later E 91.3) could not yet be delivered.) After the spread of electrical operation, they also operated on other electrified routes in Silesia The test rides were lowered from 70 km / h to 50 km / h, which indicates that the locomotive was not satisfying, and after the ordered freight locomotives appeared on the Silesian network, both locomotives were transferred to Munich, where they provided shunting services at various stations E 70 07 was retired there in 1928 and the E 70 08 1938.

Players without Steam can find the download at http://modwerkstatt.com
< >
2 Comments