Store Page
Transport Fever>  Workshop > donoteat's Workshop
This item has been removed from the community because it violates Steam Community & Content Guidelines. It is only visible to you. If you believe your item has been removed by mistake, please contact Steam Support.
This item is incompatible with Transport Fever. Please see the instructions page for reasons why this item might not work within Transport Fever.
Current visibility: Hidden
This item will only be visible to you, admins, and anyone marked as a creator.
Current visibility: Friends-only
This item will only be visible in searches to you, your friends, and admins. 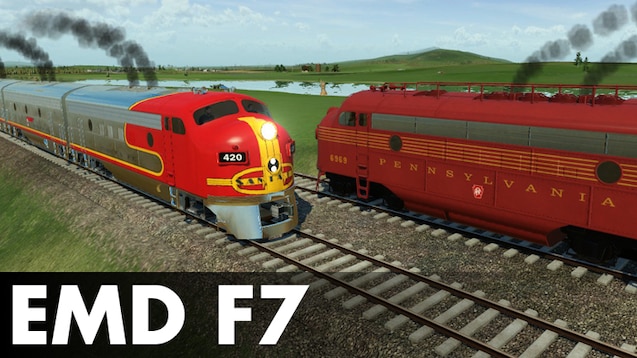 donoteat
Offline
See all 156 collections (some may be hidden)

This item has been added to your Subscriptions. Some games will require you to relaunch them before the item will be downloaded.
Description
After years of waiting it's finally here.

Known to railfans as 'Covered Wagons', or 'The diesel that did it', the EMD F7 is America's most recognizable locomotive by a country mile.

F units were never very powerful on their own, but when operated in multiple they could compete with even the largest steam locomotives, especially on operating costs. F units were originally designed primarily for freight service, with EMD's E-units providing motive power for passenger trains, but these versatile diesels were at home in almost any kind of railroad service.

- Two, count 'em, two skins! PRR Tuscan Red and ATSF Warbonnet.
- Animated Fans!
- Custom Sounds & Horn!
- A unit, B unit, and A unit reversed!
- All the other junk that usually goes into a loco!

Commissioned by steam user and now hero to the TpF community NoAchievement4U. In unrelated news, apparently I'm accepting commissions now. Message me on Steam, Twitter (@donoteat1), or https://www.transportfever.net/ if y'all are interested and we can work something out.

майонез Apr 22 @ 1:29pm
Ive seen a recurring problem where this mod breaks the textures on the vanilla sd40