Store Page
Garry's Mod>  Workshop > ProGold x1000 Rust Server's Workshop
This item has been removed from the community because it violates Steam Community & Content Guidelines. It is only visible to you. If you believe your item has been removed by mistake, please contact Steam Support.
This item is incompatible with Garry's Mod. Please see the instructions page for reasons why this item might not work within Garry's Mod.
Current visibility: Hidden
This item will only be visible to you, admins, and anyone marked as a creator.
Current visibility: Friends-only
This item will only be visible in searches to you, your friends, and admins. 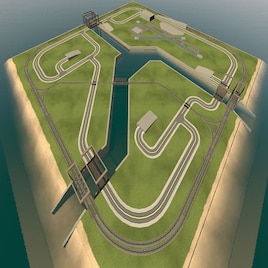 This item has been added to your Subscriptions. Some games will require you to relaunch them before the item will be downloaded.
In 1 collection by ProGold x1000 Rust Server
Real Builders

If you like my work you are always welcome to make any donation!

Garry's Mod is for me a great game to get lost in. Building vehicles in it is something that easily took up 75% of my time. It supports land vehicles, air vehicles, water vehicles, rail vehicles and so much more. However one single map to do this in was always very lacking. Alot of maps focussed on one thing and one thing only, which made me release my first map in 2014: gm_functional_flatgrass. A map that gave you all functionality from Gmod, in one map. No need to load a new map to test a new type of vehicle. However, as this was practically my first map, a lot of things weren't done so well. Or maybe also done pretty horrible. The idea was great, but unfortunately as everybody's first map it was full of bugs. The lighting looks bad, the train tracks were primitive. And unfortunately the trains also derail easily because of the func_door height differences on bridges which I didn't know about back then. Also the map did never really look pleasant. Despite it being an ugly piece of ♥♥♥♥ many people still play this map and alot of servers still run it. Which means the idea was right and with almost 90k subscribers the map does in fact fit people's building needs.

With the announcement of S&box by Facepunch I got excited for sandbox games again and decided to pick up mapping for Garry's Mod so I could finally finish what i've always wanted to have for this game. I've decided to make a new map from scratch. The reason why this is the 3rd version is because the 2nd version originally was never fully released. It was an attempt to actually edit, expand and improve over the first version but I quickly noticed in 2015 that this was a lost cause due to the way I made the first map back then (e.g. I didn't even know about custom visgroups so you can imagine the pain) and it was better to actually start over at the right time.

And now here we are, in 2018, with the release of gm_functional_flatgrass3. Fully made from scratch. Better late than never and hopefully this map is gonna give people alot of fun hours in gmod untill we've all moved on onto the next best thing.

Just like the first one this map is the go-to one for all your building needs. It has support for anything building related especially for vehicles like cars, trucks, tanks, trains, boats, air vehicles and so on. But you can also test your machines or rides or any other contraption in it obviously as it is literally the biggest map that is possible on the source engine.

The outside is a gigantic flatgrass area with roads, traintracks and the entire island is surrounded by a nice sandy coast with water. There is also an enormous airport with two runways and taxiways so multiple people can build, fly, take off and land without bothering eachother. The road system is absolutely massive and on four sides of the map you will find tunnel entrances to the lower part of the map. The island is also circled by train tracks in both directions. The traintracks are from trakpak2 which leaves for very satisfying traindriving with no derailments if you're doing it right. All this makes gm_functional_flatgrass3 a great alround map.

And all that is only the outside on the top level of the map. There is also a huge underground which is split up in multiple outside sections as well. To reach the underground you have to drive through one of the road tunnels which all connect to eachother like an underground ant-colony. You can also take the easy route and travel by train, which will lead you through a bunch of subway tunnels to the lower part of the map. Or you can decide to take one of the elevators. There is even a big elevator at the airport so you can build your planes below ground in one of the bunkers in peace, and then travel up when you want to test it.

- Full support for land vehicles (cars, tanks, trucks, busses)
- Full support for air vehicles (planes and helicopters) with the largest map possible
- Full support for water vehicles (even big ships could circle the island)
- Full support for rail vehicles (trains and tram)
- Magnum's trakpak2 used for all the traintracks (with custom slopes)
- Paintable sky, sun and fog so you can make it night in the map.
- Movable bridges so you can fit your larger boats on the inside channels of the map too.
- Enormous interconnected tunnel system underground
- Gigantic highway underground for your car speed testing.
- Materials and models packed inside the bsp so no missing textures or errors.
- Huge underground area for tank battles


The map is obviously meant again for the functionality. So to keep performance optimal it isn't that foccused on detail. So if you want an actual roleplay map full of details, it's better to look further. If you want a big map to test all your vehicles without running into limits, then this is the map for you. The reason I couldn't really detail the map more is that i'm running into Source1's engine limits. This current game engine just isn't meant for maps like this, so ultimately some sacrafices are to be made. I actually was planning on making an underground city like in the previous ones but because of the engine limits and also being kinda done with mapping at the moment i've decided to release it like this.

It is very difficult making a map this size which also looks nice but I hope I did a good job on it and many people will enjoy playing it. If/once Facepunch releases S&box I'll probably continue mapping for that, but for now I need to close the book on Source1's Hammer because i've put way too much work in it and eventhough it's fun to work around engine limits it's also very exhausting.

Well now that the map is done, it's time for me to play the game some more and I hope you will too.

☭slayermelon☭ Jun 26 @ 10:36am
pog sandbox map
everyone complains because they're uncreative and just wanna shoot eachother

ProGold x1000 Rust Server  [author] May 31 @ 1:42am
It is 'functional' as in aimed for building and vehicles. I never cared much for NPC's/RP and the map is also way too big to add a navmesh in.

simpleprofile69 May 31 @ 12:16am
if it is functional, does it have navmesh? is navmesh considered a function?

ProGold x1000 Rust Server  [author] Apr 12 @ 11:49pm
What are you talking about misleading screenshots? Both are entire different maps.