Store Page
Arma 3>  Workshop > theLargerCog's Workshop
This item has been removed from the community because it violates Steam Community & Content Guidelines. It is only visible to you. If you believe your item has been removed by mistake, please contact Steam Support.
This item is incompatible with Arma 3. Please see the instructions page for reasons why this item might not work within Arma 3.
Current visibility: Hidden
This item will only be visible to you, admins, and anyone marked as a creator.
Current visibility: Friends-only
This item will only be visible in searches to you, your friends, and admins. 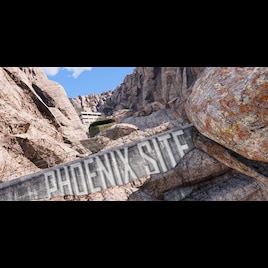 theLargerCog
Offline
See all 8 collections created by theLargerCog and other people (some may be hidden)
You need DLC to use this item.

This item has been added to your Subscriptions. Some games will require you to relaunch them before the item will be downloaded.
In 1 collection by theLargerCog
Some Alright Arma 3 Templates

5 items
Description
Background
During the CSAT's growing sphere of influence over Malden, Phoenix Site was commissioned to be constructed in the canyons north of Vigny. Due to changes in global circumstances, construction on Phoenix Site was postponed, then later cancelled. After Phoenix Site was abandoned, its facilities deteriorated into a dilapidated state. Although unfinished and unmaintained, Phoenix Site still has the potential to be a strategic point on Malden, and its ashes may give rise to a new and unknown purpose.

Features
Phoenix Site is composed of two major areas designated as: the main checkpoint, and the water accessible caverned facility. The main checkpoint itself is multi-leveled and features a large helipad, capable of landing large helicopters. The entrance is fortified with bunkers which act as both security posts and checkpoints. The caverned facility is also multi-leveled and also acts as a footpath to reach the depths of the cave. The cave itself can be accessible by ground, air, and sea, and much more depending on whether mods are used. The two main areas of Phoenix Site are supported by smaller outposts, checkpoints, and minefields. not charted on the map

Zeus is enabled, to allow for PVP or creating custom missions while exploring the facility template.

Notes
Version 1
There are 2 Zeus Slots and 16 Player Slots.
Seagulls will fly through walls, they don't give a f***.
AI can be commanded to navigate certain buildings, but may be unable to walk past certain areas.
AI controlled helicopters can land on the helipad, but could glitch.
Built in Dev and RC Build, glitches may occur.
Zeus is compatible for using custom addons and mods.

theLargerCog  [author] Jul 31, 2018 @ 5:04pm
@Сержант try downloading from Armaholic, to see if that works. Are there any error messages?

theLargerCog  [author] Jul 26, 2018 @ 3:19pm
@Mantia, you will likely have to right click the folders where the objects are in, and checking the "enable transformation" box.

GoonSix Jul 26, 2018 @ 1:28pm
Is there anyway to edit it in the editor? All the objects don't appear to be selectable. Really enjoy it but frames are low with the amount of objects so was looking to removed some to make playable with some friends.

theLargerCog  [author] Jul 25, 2018 @ 4:02pm
Look forward to it man, and hey if you'd like me to check it out beforehand send me a pm or something, it might be cool to exchange a few ideas

[Λ]Farsight Jul 25, 2018 @ 3:59pm
There's a project I recently worked on with another guy that should get published in a couple months or so that I did all the "map design" for, as soon as it gets posted I'll link you too it so you can see.
< >