Store Page
Total War: WARHAMMER II>  Workshop > Ubermorgen's Workshop
This item has been removed from the community because it violates Steam Community & Content Guidelines. It is only visible to you. If you believe your item has been removed by mistake, please contact Steam Support.
This item is incompatible with Total War: WARHAMMER II. Please see the instructions page for reasons why this item might not work within Total War: WARHAMMER II.
Current visibility: Hidden
This item will only be visible to you, admins, and anyone marked as a creator.
Current visibility: Friends-only
This item will only be visible in searches to you, your friends, and admins. 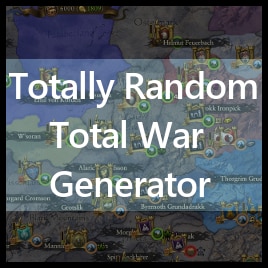 Ubermorgen
Offline
See all 529 collections (some may be hidden)

This item has been added to your Subscriptions. Some games will require you to relaunch them before the item will be downloaded.
Description
This mod randomizes region ownership of all regions, to have more diverse campaigns and starting positions. Works for both campaigns and all factions. It is highly recommended but not required to use Mod Configuration Tool: Reborn to get the most out of this mod and be able to customize the generator (for example: ignore climate, player only, AI only, make total peace, upgrade province capitals, adjust starting money...). Compatible with Crynsos' Faction Unlocker. Obviously you have to start a new campaign for it to work.

! If you can't recruit units, save the game and load it again.

! The mod can be safely disabled after randomizing and saving your campaign.
! Might be incompatible with other mods that use scripts for character spawning, change of region ownership etc. or mods that change a many aspects of the game. Please check the discussions section and threads for known issues and solutions. You should have as few mods as possible active at start and enable any save game compatible mods after generating and saving a new campaign to ensure best compatibility.

Full Description
So here is what this mod does exactly (in that order):
- shuffles faction_list, region_list and list of spawn positions for horde & rogue factions
- assigns each faction to a random region, where it will start, while abandoning their previous settlements (prefers suitable climate zones)
- makes TOTAL PEACE for each faction (don't worry, normally there are at least 10 declarations of war in the first turn)
- moves horde & rogue armies to random spawn positions
- gives each faction the chance to receive additional regions (adjacent, or adjacent to adjacent)
- moves all characters of each faction close to their new settlements (agents get embedded into primary army)
- all inhabited settlements will be repaired/upgraded to tier 1 (only the main building chain and ports!) and all garrisons fully replenished. Province capitals will be upgraded to tier 2, factions with only 1 settlement will also get an upgrade to tier 2.
- applies an effect_bundle to each region, adding +100 of the new owners' religion, +3 public order and +18 growth for 10 turns to bring corruption/untainted levels to ~50% (can vary depending on how many settlements with the same religion are nearby)
- centers camera on first settlement of player's faction (only works for unlocked factions)

Known Problems
If you know a solution to one of the listed problems, please contact me, thanks!
- in some rare cases a faction's army will not be teleported to their settlement (as it is currently not possible to check whether a position is within the walkable area of the map)
- known factions / diplomacy still includes previous neighbours
- major factions still have the introductory camera tour across their previous starting lands
- since all regions are initially destroyed, you might notice some lag when moving the camera to new regions for the first time
- previously owned / visible regions are still visible
- unable to recruit units? save the game and reload it again to fix that!

Notes
This is my first real script mod and it took me quite some time to create. I have learnt much, which is why I put lots of comments in the script, maybe it will help somebody else. There are many things I'd like to fix and/or change, but for now I am pretty satisfied with how it turned out and I really wanted to get it out there, so people can try it and give feedback. It might be incompatible with other mods and I won't be trying to make it compatible with anything.

Check out some of my other mods

Special Thanks
- Marthenil, Drunk Flamingo, Vandy, Mixu and everyone else who provided assistance with lua scripting on C&C modding discord. This would not have been possible without you guys!
- Crynsos and Cataph: for setting up a discord channel, where modders can share ideas and help each other out.

If you have any ideas or comments on how to improve this mod, please let me know in comments or discussions section. All feedback is appreciated!

thanks for your time and have a nice day,
Uber
Popular Discussions View All (10)

chickabumpbump Dec 1 @ 3:22pm
Any mods that remove the Empire authority, playing as them with this mod isn’t fun. The electors start all over and get killed and your authority tanks and can’t recover

Chiseanne Nov 13 @ 3:16pm
It works just fine for all races but the Woodelves. Started without mods (besides skip intro movies). The Woodelves stay in the forests in both 1.92 and 1.12. Can you please take a look into it !? thx a lot for this mod - I love it!

xxu5 Nov 3 @ 7:01pm
Markus Wulfhart on Vortex crashes the game. Tried with only this mod active, shuffling AI only, or player only

vasari1212 Oct 31 @ 12:37am
avelorn with this mod does not work with shuffling ai only,you just loose your starting city to random wood elves

Knushgar Oct 14 @ 3:58pm
@Ubermorgen I am bad at paying attention to such things.. xd

Knushgar Oct 14 @ 2:47pm
Yeah it works fine, I figured out what caused the lag, it's all the settlements burning up or changing all at once, goes away after a while.

Ubermorgen  [author] Oct 14 @ 10:42am
there should be no need for an update for this mod. Last time i checked, it was still working.

james Oct 13 @ 5:40am
Reeeaaalllyy appreciate you for putting this out mate, but is there any chance we could get an update? Stick a donation link here somewhere and I'll donate, this mod seems essential
< >