Store Page
Hearts of Iron IV>  Workshop > G.D.W's Workshop
This item has been removed from the community because it violates Steam Community & Content Guidelines. It is only visible to you. If you believe your item has been removed by mistake, please contact Steam Support.
This item is incompatible with Hearts of Iron IV. Please see the instructions page for reasons why this item might not work within Hearts of Iron IV.
Current visibility: Hidden
This item will only be visible to you, admins, and anyone marked as a creator.
Current visibility: Friends-only
This item will only be visible in searches to you, your friends, and admins. 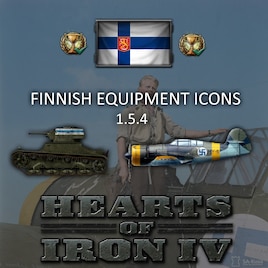 G.D.W
Offline
See all 161 collections (some may be hidden)

Welcome to the Finnish Plane Icons mod! In this mod i've replaced the base games black shadows for Finland's airforce with beautiful icons made all by yours truly. The mod is still technically in development so stay tuned for updates!

I've got some big goals for this mod. The next update will inclued jet icons for FInland and after that, carrier planes. In the far future i'd like to also make the Finnish tank tree and do Infantry equipment, I can even do portraits so maybe this mod will develop into a total GFX addion for Finland someday!

All planes here are historical planes and nearly all were actually used by the Finnish Air Force, however the dates are far from perfect and there might be better planes to use than I did, this was just a fun project for me so relax, anything is better than nothing :)

Another random note for you, if you enjoy seeing black and white photos restored in color then all the links on the side lead to my various colorizaton accounts

Q: I've seen some of these in Kaiserreich, are you a theif!?
A: No sir! It was me who made these icons for KR, however i never "Finnished" them during my time on the team but now I've come back to complete the planes for my own mod

Q: What's up with the swastikas?
A: Historical reasons only. The Finnish swastika is an ancient symbol of luck, used from the prehistoric times. It became popular in art in the national romantic era, when the Finnish nation and national imagery was under creation. And so the Swastika became the insignia of the Finnish Airforce in 1918 because Swedish count Eric von Rosen gave the Finnish government its first aircraft, when he flew his private plane to Finland in 1918. He had painted his personal symbol of luck on the plane, a blue swastika. The Finnish Aircraft had just been founded and this symbol was adopted as the insignia of the Finnish Aircraft in the same year.

Q: I have better questions not stated here!
A: Comment below or DM me and i'll resond ASAP

7-11-18 Version 3!
Tanks have been added! Sadly Finland did not reall produce her own tanks so most of the tanks represent captured and copied or licensed tanks.

7-10-18 Version 2!
In todays update I've added jet icons to the mod! Because Finland did not produce her own jets I had to look beyond to other nations, jets added come from Germany, USSR, and the USA due to multiple reasons. The German jets hypothetically would've been captured and possibly copied, the USSR actually sold MiG-15s to Finland so no problems there. As for US jets we can assume they were liscenced or bought.

Elefants Nov 11 @ 6:06pm
hey man im doing a fresh update and I know you've said yest to other but for me its just common courtesy to ask if I could possibly use this for the mod to tie it together in one nice package?