Store Page
Arma 3>  Workshop > TheGreenSquier's Workshop
This item has been removed from the community because it violates Steam Community & Content Guidelines. It is only visible to you. If you believe your item has been removed by mistake, please contact Steam Support.
This item is incompatible with Arma 3. Please see the instructions page for reasons why this item might not work within Arma 3.
Current visibility: Hidden
This item will only be visible to you, admins, and anyone marked as a creator.
Current visibility: Friends-only
This item will only be visible in searches to you, your friends, and admins. 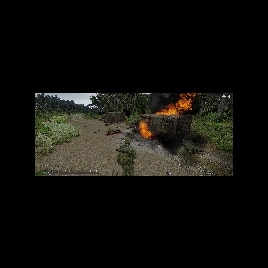 TheGreenSquier
Offline
See all 250 collections (some may be hidden)

This item has been added to your Subscriptions. Some games will require you to relaunch them before the item will be downloaded.
Description
ATTENTION LIEUTENANT! You just got your butter bars, eh? Time to put your skills to the test.

You and your platoon are being deployed to a hot spot in Vietnam. Hopefully you paid attention in OCS, because you will need to remember how to call in artillery, lead your squad through enemy-infested jungles, assault heavily fortified positions, and coordinate transportation through helicopters and other vehicles.

There are several tasks you and your platoon will need to complete, and if all goes well, you and your boys will make it home for Christmas.

Will it be easy?

Hell, if it was, they wouldn't need us here, would they?

This is a custom scenario for the Unsung Vietnam mod. A lot of time went into it as I love adding the little details that help it feel real. You play as a Second Lieutenant platoon commander in Vietnam with four unique and challenging tasks to accomplish. You have access to nearly unlimited artillery, a Huey on standby, and a subordinate squad to command.

NOTE ~ IF THE PLATOON COMMANDER DIES, YOU LOSE THE SUPPORTS

* Fully furnished based of operations with armories, security patrols, and a vehicle depot

* Patrol Boats, though unfortunately the river is too shallow in most places to use them

* To call supports, press 0 - 8 and choose your support

* The Helicopter transport support is pretty glitchy. There's not much I can do about this but give you advice:
- If you want to take off from your base, tell your guys to get in first, call the transport BEFORE getting in yourself, then get in and choose your destination on the map.
- When returning to base via chopper, select the "helipad" marker as your destination on the map
- Tell your guys to disembark from the helicopter before it lands

* The scenario was designed to be played with your AI squad mates. If you adamantly don't want them, press the ~ button to select them all and give them the "stop" command.

* Players can now respawn as another group member if they are killed (this is the way I had tested the map in fact, I had forgotten that multiplayer used different settings than single player). The revive mechanic has also been added.

* Please report any glitches, as well as leaving comments for feedback!

Donations are accepted and appreciated:
paypal.me/BPotomac

zakhm123 Feb 24, 2020 @ 11:13am
I always get stuck on a loading screen after the briefing, I can hear the mission running in the background obs can't play, Arma everybody

RaccoonOnTheTree Aug 3, 2019 @ 5:22am
why my ai cant run? they just walking around and do their own shit