Store Page
Hearts of Iron IV>  Workshop > GE's Workshop
This item has been removed from the community because it violates Steam Community & Content Guidelines. It is only visible to you. If you believe your item has been removed by mistake, please contact Steam Support.
This item is incompatible with Hearts of Iron IV. Please see the instructions page for reasons why this item might not work within Hearts of Iron IV.
Current visibility: Hidden
This item will only be visible to you, admins, and anyone marked as a creator.
Current visibility: Friends-only
This item will only be visible in searches to you, your friends, and admins. 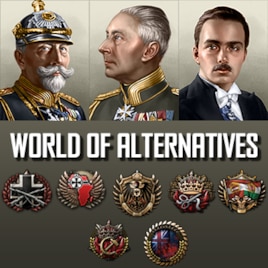 GE
Offline
See all 512 collections (some may be hidden)

Now, if you turn off the historical AI focus, all AI will perform alternative tricks. Civil war in Germany and Japan, independent India, Australia, New Zealand and Canada. Minors at the first opportunity political focuses for communism / fascism.

The mod is activated when the historical focus is off

I will gladly accept donations.

Its_Salty May 12 @ 11:15am
its suposed to be base game focus it just makes the ai change what focus the do also like halve of the trees are dlc so ha may be your problem

kaiser463 Apr 7 @ 7:55am
I haven´t played this mod yet but I already know it´s gonna be complete anarchy.

Saft Karotte Mar 26 @ 1:45pm
I tested it and it worked fine with 1.9.1 but the problem is that the french Focus Tree is switched to the old one.