Store Page
Arma 3 >  Workshop > Hunger's Workshop
This item has been removed from the community because it violates Steam Community & Content Guidelines. It is only visible to you. If you believe your item has been removed by mistake, please contact Steam Support.
This item is incompatible with Arma 3. Please see the instructions page for reasons why this item might not work within Arma 3.
Current visibility: Hidden
This item will only be visible to you, admins, and anyone marked as a creator.
Current visibility: Friends-only
This item will only be visible in searches to you, your friends, and admins. 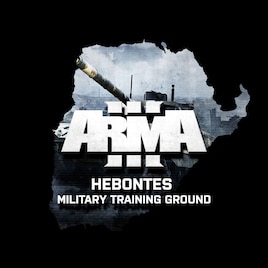 Hunger
Offline
See all 1424 collections (some may be hidden)

This item has been added to your Subscriptions. Some games will require you to relaunch them before the item will be downloaded.
Description
HEBONTES AAF/NATO MILITARY TRAINING GROUND
BY HUNGER & CHRISSY

You can support us by donate an amount, no matter how much, we appreciate it a lot! Thank you!!

my girlfriend Chrissy and me are happy to announce the release of our recent project, the island of Hebontes. After more than four months of planning, painting, terraforming, repaint, design and object placement we finally got the first release candidate working. Sure the island is yet not perfect and has many issues, but since our summer vacation ist ahead, we had to get a combat ready version out now.

My wish was to give all ArmA 3 communitys a place where they can practise their tactics, especially infantry, mech infantry and tanks. Hebontes is a fictional mix of several training grounds in Germany, fittet in the setting of vanilla ArmA3. Parts of Grafenwöhr, Bergen, Munster Nord and several fictional places are the foundation for Hebontes.  I want to thank

for their continous support and help, to get this thing working. Without them, the terrain would be released in two years or so. Thank you very much.

In 1957, the Republic of Altis and Stratis has been in need for a dedicated training ground for their recently deployed forces, the AAF. Since the island of Hebontes was nearby and basically only populated by a hand full of fishermen, the decision finally has been made to resettle the population of Hebontes to Altis and Stratis. After 60% of Hebontes population has been resettled, the transformation began. Shooting ranges were built, a training camp was established and the "Hebontes Command and Control" began their service in 1970.

In 1981, the first NATO Forces, especially  USA, Germany and France deployed bataillions for training aside the AAF.

During the Civil War, Hebontes was used as headquater as well as hub for resupply and reorganisation.


PLANS FOR NEXT RELEASE

- Airport for fixed wings
- Two more training Camps
- Better underwater heightmap
- Further config improvements
- The Alonaki Gravel Pit is not yet what I wanted it to be, so i will build some kind of abandoned industrial complex here
- Some more assets
- POPUPTARGETS :::: German Range POPUPTargets are in the works, they arent ready yer, i'm very sorry guys. Time is just running too fast
- Further improve the tank test and driving range, there are too few obstacles right now

PLEASE BE AWARE that I'll be not available until Autust 2018. I'll hike the Kungsleden with Chrissy, so I cant take care of answering questions etc. I'm sorry :(

CREDITS & SPECIAL THANKS TO:

- Christin B. for all the help she did, planning, configs and object placement
- Daniel F, aka. vPzBtl33_Franz for helping me with hebontes_assets and every weekend I've stolen from you :)
- George Floros for translationg everything into greek language
- Silola for his absolutely great tool XCam
- Memphis Belle for teching me how to build terrains in general
- The whole virtual Lehrbrigade 16 for testing and  bug hunting

NONE exept of ArmA 3 itself

Feldi May 5 @ 7:38am
I can't seem to load it up on a dedicated server, it shows the map but no missions and when I try to load it just boots me back out to create game screen. Anyone knows why? HostHavoc is the server.

kodyalden.ka Apr 8 @ 5:37pm
Has anyone come up with some scripts to keep scores with the ranges? just curious

Corporal Cal Jan 8 @ 8:44am
Anyone know if its possible to activate individual targets in a row, rather than the whole row? I can do it by creating another control table but I'd like to have some randomness to it if I can.

Jack Jan 5 @ 9:20pm
Works fine for me. Drop targets also work fine for me too with ACE.

Warhammer Actual Nov 12, 2021 @ 2:32pm
Hi , can anyone confirm if this is working or broken as of now.. I set everything up exactly as in this video and none of the controls functionality is working? Thank you in advance for any help

Hunger  [author] Feb 12, 2021 @ 3:22am
I'm very sorry. Hebontes was a very interesting and engaging project for me and my former platoon. Would have loved to make the source files available...