Greenlight > Games > Bloober Team's Workshop
Greenlight is being retired. For more information on how to submit games to steam, refer to this blog post.
This item has been removed from the community because it violates Steam Community & Content Guidelines. It is only visible to you. If you believe your item has been removed by mistake, please contact Steam Support.
This item is incompatible with Greenlight. Please see the instructions page for reasons why this item might not work within Greenlight.
Current visibility: Hidden
This item will only be visible to you, admins, and anyone marked as a creator.
Current visibility: Friends-only
This item will only be visible in searches to you, your friends, and admins.
A-Men on PC !
Description Discussions0 Comments108 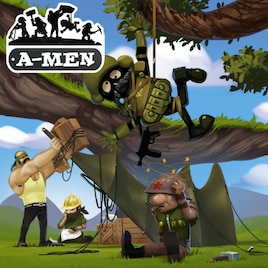 Bloober Team
Offline
See all 15 collections (some may be hidden)

View A-Men on PC ! in the store

Store page
Description
A-Men is BlooberTeams' tribute to classics, like Lemmings or Lost Vikings. The game requires you to plan your strategy in ever-changing environment (as you play, you gain new skills, new objects appear in the game).

At your disposal you'll have:
- 5 unique characters (you will have to play them simultaneously, to help one another)
- 15 skills
- 40 levels (believe me, there's quite enough puzzles to frustrate the hell out of you, in a good way, of course ;))

Although, to catch a spirit of oldschool games, A-Men applies trial&error approach to learn on one's own mistakes, we've also applied "inmap saves" system - you will not have to got through whole level from the beginning, if you fail.

A-MEN unfolds at A-Corp, the world's biggest producer of the robot soldiers known as A-Droids. It's where we meet A-MEN's heroes, following a massive explosion at the factory which accidentally releases hundreds of lethal A-Droids. These wayward troopers must be rounded up before they cause chaos around the globe.

You'll embark on a journey through a series of vividly different worlds, featuring multiple challenges and including the Forest, Seacoast, Winterland and Factory levels.

In chasing down the A-Droids and thwarting their traps, A-MEN presents you with a series of complex puzzles. Turn the mechanical army's devious tactics back onto them and pick your enemies off one by one.
Escape with your life, then revisit each level to improve your score and refine your strategy skills.

UPDATE 06May
I've added first of 5 character introductions: Ladies and Gentlemen, I give you.. Aardvark!

UPDATE 13May
Check out our gallery: 3 of 5 heros are already presented there! Which one is your favourite?
< >
108 Comments

thorvindr Oct 21, 2013 @ 10:39am
Seems like a really cool twist on the Lemmings genre, which is sadly missing from today's market.

A-Men on PC ! has been Greenlit and is now listed in the Steam store. For the latest information, purchase options, and discussions for A-Men on PC !, please see it on the Steam Store or in the Steam Community.
Visit Store Page
For more details Visit Community Hub
For latest discussions
If you really, really want to, you can continue to the Greenlight page. Information on this page may be out of date, since all the action has moved to the areas noted above.