Store Page
Terraria > Guides > kraft mac-n-cheese™'s Guides
This item has been removed from the community because it violates Steam Community & Content Guidelines. It is only visible to you. If you believe your item has been removed by mistake, please contact Steam Support.
This item is incompatible with Terraria. Please see the instructions page for reasons why this item might not work within Terraria.
Current visibility: Hidden
This item will only be visible to you, admins, and anyone marked as a creator.
Current visibility: Friends-only
This item will only be visible in searches to you, your friends, and admins.

How to Defeat the Twins (2019)
By kraft mac-n-cheese™
Wow, this guide suddenly blew up. I have corrected my grammar mistakes and made it less hard to read for your convenience. You're welcome.

I've seen many people on the "Discussions" tab of the Steam forums. Many of these people require help on mechanical bosses. The most I've seen being requested are the Twins. This guide will hopefully teach you how to defeat these floating eyeballs from hell and get some sweet goodies from their corpses.

Comments
1. Preparation
Armor
The preparation of fighting the boss is very important. I recommend using Adamantite or Titanium armor because of their high armor rating. The armor will allow you to take some blows from the Twins without dying immediately. You can switch out the melee helmet for the ranged variant of the helmet, but you will take more damage than if you wore the melee variant.

Potions
People always forget to bring potions before fighting a boss. You aren't invincible, you know. The potions I recommend are listed below.
Optional Potions 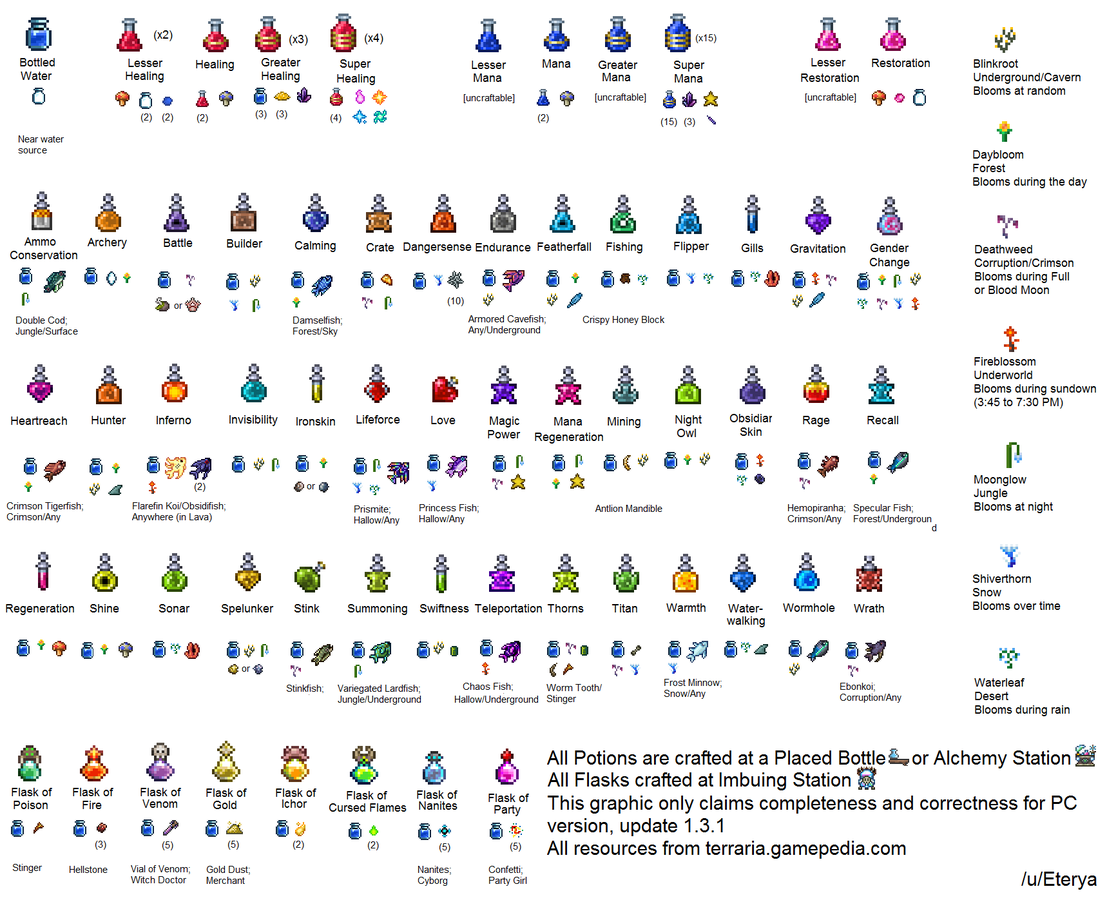 Weapons
The weapons you'll be using are the Clockwork Assault Rifle or the Megashark. The Megashark is highly recommended over the C.A.R, but it's not mandatory. I recommend Crystal Bullets which are crafted from Crystal Shards. They naturally regenerate in the Underground Hallow. When Crystal Bullets hit an enemy, the bullets shatter upon impact dealing extra damage.

Accessories
I recommend using these accessories before the fight.
Note: If you're in Expert Mode, make sure all of your accessories are Warding. If you're in Normal Mode, use Menacing for the extra damage; or if you worry about your health being drained too fast, then use Warding instead.
2. The Arena
I recommend getting about 500-800 wooden platforms and building it in a completely straight line in the sky. Make sure you get rid of any mountains that might block your way during battle.
3. The Fight
Start at the middle of your arena then summon the Twins. When you summon the Twins, run the opposite direction of where they spawned. Use the minimap if necessary. If you chose Lightning/Spectre boots, the fight shouldn't be too difficult. With your boots, run across the platforms while repeatedly shooting the Twins. Hop over incoming projectiles like fire and lasers to avoid damage. If you chose Flesh Knuckles over boots, then use your wings to boost yourself to get away from the Twins. This method is much more difficult than using Lightning/Spectre Boots. Keep firing your C.A.R or Megashark at them while dodging the best you can.

Focus on Spazmatism as he is the biggest threat because he deals the most damage in his second phase. Once he enters phase 2, keep running. His flames won't hit you but your bullets will. If you run out of platforms while Spazmatism is in phase 2, fly above or under him and run in the direction where more platforms are. You may get hit doing this. When Spazmatism is down, focus on Retinazer, jumping up and down to avoid his lasers. When Retinazer enters phase 2, keep sprinting and do little hops over his lasers when he starts shooting rapidly. Rinse and repeat until both of the Twins are dead.

I beat the Twins with this exact guide. However, I added Sashimi to improve my buffs. With the Warding Flesh Knuckles, Shield, Wings, and Ironskin, I got 76 defense points which is a little bit overkill. I used the Lightning Boots, Flesh Knuckles, Star Veil, Leaf Wings, and Obsidian Shield for acessories, and used the Megashark as my weapon of choice.

If you liked or used this guide and it worked well, leave a rating! Thank you for your time.
< >
29 Comments

SadSultana May 21, 2020 @ 3:40am
I just used my wings to circle around them and bombarded them with the stormbow and holy arrows. A message on screen said, "this is going to be a terrible night", and it spawned. I had no buffs and i had 52 defence. All you need is adamantite armour, wings and the stormow. EZ

SOMEBODY THAT YOU USED TO KNOW Aug 9, 2019 @ 9:36am
Just get wings, boots and a gravitation potion.
And a decent weapon that's got range (for example: Shadowflame knife, Shadowflame bow, the Crystal Serpent). Dodge them eyes, kill the green one first. Pretty easy really.

BabyHotWheels Aug 9, 2019 @ 8:35am
happypug if you could give me free weapons it would help a lot