Store Page
Hearts of Iron IV>  Workshop > BasileusRex's Workshop
This item has been removed from the community because it violates Steam Community & Content Guidelines. It is only visible to you. If you believe your item has been removed by mistake, please contact Steam Support.
This item is incompatible with Hearts of Iron IV. Please see the instructions page for reasons why this item might not work within Hearts of Iron IV.
Current visibility: Hidden
This item will only be visible to you, admins, and anyone marked as a creator.
Current visibility: Friends-only
This item will only be visible in searches to you, your friends, and admins. 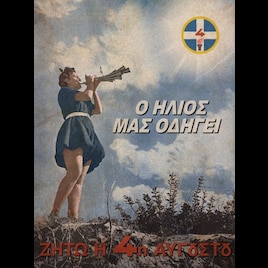 BasileusRex
Offline
See all 34 collections (some may be hidden)

This item has been added to your Subscriptions. Some games will require you to relaunch them before the item will be downloaded.
Description
This mod is now legacy
This mod has been deprecated by my new mod, Greece Improved II, offering a superior experience! Check it out there. This is mainly kept on here for people in the middle of a game
https://steamcommunity.com/sharedfiles/filedetails/?id=1708458001

Greece Improved is a continuation of Elymead's "General Greece Improvement Project."
It should be fixed for the Ironclad update. If any issues arise, comment them and I will try to fix them if time and circumstances permit.
*Fixed the event bug
« Current Features » (Taken from original)

* Greek National Focus Tree - Larger than that of any other country
* Specific events associated with the focus tree
* New generals and one new admiral for the Greek military (made by Vaevictis)
* Historical portraits for the Generals and Admiral (also by Vaevictis)
* The flag of Greece for each government has been changed.
* The name of Greece for each government has been changed
* Greece has 1 new state: 'Sterea Hellas'
* Albania has 2 new states : 'Toskeria' and 'Gegheria'
* Greece receives claim on Toskeria
* Tirana victory point has increased worth : 5 -> 10
* Albania has one new victory point in Toskeria : 'Vlorë', costing 5 victory points.
* Central Macedonia has 2 new Provinces from Thrace and Epirus
* Epirus reduced to actual borders.
* Thessaly reduced to actual borders.
* Thessaly has new victory point: 'Volos', costing 10 victory points
* 'Central Macedonia' renamed to 'Macedonia'
* 'Macedonia (Yugoslavia)' renamed to 'Vardar Macedonia'
* 'Thrace' renamed to 'Western Thrace'
* 'Istanbul' (state) renamed to 'Eastern Thrace' (Need to fix this one in the localizations)
* 'Kathestós Metaxá' party renamed to 'Ethnikí Kyvérnisis 4is Augoústou'
* 'Metaxá' abbreviation changed to 'K4A'
* Georgios Kosmidis removed as leader of Greek fascist party
* Ioannis Metaxas is new leader of Greek fascist party
* 'Ethniki Enosis Ellados' party changed ideology from nazism to fascism
* 'Ethniki Enosis Ellados' party renamed to 'Anadiorgánosis 4is Augoústou'
* 'EEE' abbreviation changed to 'A4A'

Many thanks to Elymead for their work on the original mod!
Popular Discussions View All (3)

BasileusRex  [author] Mar 27, 2019 @ 3:17pm
@Frank-2, Undead High Officer
Possibly at some point. Not with the next update. I'm more or less reconfiguring the entire mod, so if I can eventually work it in, I will. But, I'm a one man mod team, so its very time consuming as is.

mike4314 Mar 25, 2019 @ 2:54pm
@pona12,
Sorry! I ran it with "The Road to 56" mod because it seems like you added in additional events than compared to without any mods. So it is specifically with Road to 56. Its only when justifying claims against Turkey. And will crash when it goes to the next day

BasileusRex  [author] Mar 24, 2019 @ 9:50pm
@mike4314 Hm. I don't know. I knew I was going to work on a bigger update, so the compatibility update might have had some bugs that slipped past me. Perhaps check your other mods, or verify the integrity of your game cache.
Also, I know you're probably joking, but I'd rather not have an argument erupt in the comment feed, so let's not use that kind of language in the comments.

BasileusRex  [author] Mar 23, 2019 @ 8:38am
An update is coming!
"The time has come to form the greater union, and finally fill the power void in the region. From the time the Romans united the entire Mediterranean, to when the Byzantines out of Constantinople managed to hold the balance in the Balkans, to when the Turks established a system to keep all their subjects content and united, we finally stand at the precipice of something even greater; a union of equals, standing strong and united against outside forces seeking to tear us apart and colonize us."
-description from the Eastern Mediterranean Confederation focus, one of the many new paths coming to this mod

Antares Black Mar 11, 2019 @ 10:51am
Great mod, adds flavor to greece but doesn't make it excessively powerful like some focus mods would. The one bug I've had with it though was the general lvl 2, and the field marshall lvl 3 have all their skills at 1, attack/def/plan/logistics.

BasileusRex  [author] Mar 4, 2019 @ 5:44pm
@paf13 I gotcha now. These are great sugggestions, and I will very likely implement them. However, when adding the ability to expel the monarchy, I'll probably make it where expelling the monarchy could possibly trigger a civil war to happen.
< >