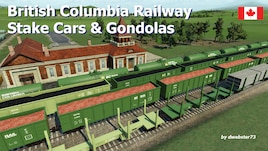 dwebster73
Offline
See all 53 collections (some may be hidden)

This item has been added to your Subscriptions. Some games will require you to relaunch them before the item will be downloaded.
Description
This mod adds 3 stakecars and 3 gondolas in British Columbia Railway colors. These are repaints of the generic 1952 stake car and 1955 gondola found in Transport Fever.

Stake Cars
These skeleton log cars were built by National Steel Car (NSC) in 1966 and 1968 for the Pacific Great Eastern Railway (PGE). Originally delivered in brown in 1966 and black in 1968, the cars were repainted green after Pacific Great Eastern became British Columbia Railway in 1972. In 1984 the BCR was restructured and BC Rail was formed. Later the company experienced economic problems and in 2003 was taken over by Canadian National (CN).

dwebster73  [author] Jun 8, 2018 @ 5:05pm
@Drkilljoy91 - Great photo of the UP engine! Would like to help, but currently I only do repaints. The unit you are showing is an EMD E9 and I am unaware of any E9's available for TpF. There is an E1 available in the workshop. Perhaps you can check with that modder about doing this.

dwebster73  [author] Jun 8, 2018 @ 3:16pm
@Drkilljoy91 - Aren't all repaints just that, ... a paint job with some logos? I believe the generic stake car was modeled on BCOL light green stake car. So I decided to paint it properly with the actual BCOL logos, etc. I know there isn't much to see with a stakecar repaint, but I like to see trains with the real liveries, plus it adds to the BCOL set I've been doing.

As for the gondolas, that's another matter. I only did the gondolas because the stake car and gondola share the same texture files. So if I were going to do one, it's efficient to do the other in the same package.