Store Page
Cities: Skylines>  Workshop > Badi_Dea's Workshop
This item has been removed from the community because it violates Steam Community & Content Guidelines. It is only visible to you. If you believe your item has been removed by mistake, please contact Steam Support.
This item is incompatible with Cities: Skylines. Please see the instructions page for reasons why this item might not work within Cities: Skylines.
Current visibility: Hidden
This item will only be visible to you, admins, and anyone marked as a creator.
Current visibility: Friends-only
This item will only be visible in searches to you, your friends, and admins. 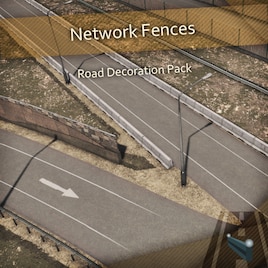 Badi_Dea
Offline
See all 7949 collections (some may be hidden)

This item has been added to your Subscriptions. Some games will require you to relaunch them before the item will be downloaded.
Description
Here are some road decorations, made as network fences.
Fences were officially added in the Parklife expansion, though you don't need to own the expansion to use them!

There are 5 Network Fences included in this pack:
WavyDecoratedSoundBarrier - This is a fancy decorative sound barrier for highways running through nice parts of town.
CrashBarrier1Side - Your typical guard rail, road facing side. This is aligned to seamlessly match up with the double sided crash barrier when connected.
CrashBarrier2Side - The same guard rail as previous but double sided, meant for meadians. This also features a custom ending segment.
JerseyBarrier - A concrete median, often called Jersey Barriers.
StandardSoundBarrier - Far from standard, but names are hard. This is a stamped concrete sound wall. One side features scenes of nature, the other has scenes of industry, commerce, and progress.

You can find this in-game in the beautification menu, under the Walls and Fences tab if you own Parklife - If you don't, they will be with the Quays and Canals
These networks are called 'fences' for a reason, they will exactly conform to the terrain and are incapible of being raised or lowered.

The network tiling mod ( https://steamcommunity.com/sharedfiles/filedetails/?id=1274199764 by Ronyx69) is strongly reccomended, but not having it will not break the asset, it'll just look a LOT ugly.

CowabungaDude85 Apr 14 @ 9:14pm
You can find this in-game in the beautification menu, under the Walls and Fences tab if you own Parklife - If you don't, they will be with the Quays and Canals

A Disappointing Sandwich Feb 21 @ 10:08am
Hi Badi, for some reason the shadows are very inaccurate, and it makes the fences appear like they are floating. I was wondering if there was a fix for this. Thanks.

Gojulas2k Jun 27, 2021 @ 1:27pm
Is it possible to make a version that isn't terrain conforming? I would like to use these networks on an elevated motorway. Great asset!

I don't care if they don't do anything for the noise, I just have some buildings right next to the ramps and I want it to look like they are somewhat protected.
< >