Store Page
Dark and Light>  Workshop > Darinius417's Workshop
This item has been removed from the community because it violates Steam Community & Content Guidelines. It is only visible to you. If you believe your item has been removed by mistake, please contact Steam Support.
This item is incompatible with Dark and Light. Please see the instructions page for reasons why this item might not work within Dark and Light.
Current visibility: Hidden
This item will only be visible to you, admins, and anyone marked as a creator.
Current visibility: Friends-only
This item will only be visible in searches to you, your friends, and admins. 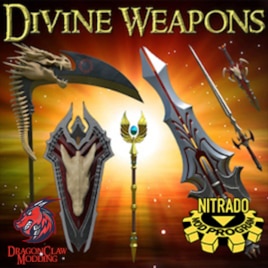 WolfySim
Offline
See all 94 collections (some may be hidden)

Steam Mod ID: 1403348066
Crafted with Hearts and Souls, Hatred and Revenge, Kindness and Blessing from Beasts, Legends and The Gods. These Weapons Can Only Be Wielded by The Gods Themselves...
Or So We're Told by The Legends and Stories Told Throughout the Kingdom Of Archos. I On the Other Hand Think They May Also Be Wielded by Those Courageous Enough to Challenge The Gods And Live To Tell The Tale.

So, in the Legends told, it Says That after defeat, Bahamut's Soul was Forged into a Blade to Gather Life While He Slumbers, Defeated by Aetherial And His Hammer. Andraste's Axe was forged with the metal from his Armor and Strength as The God Of War after casting his Brother Erebus From The Heavens. Being Cast from The Heavens Erberus created a Greatsword with his Hatred to have Revenge against his Brethren. On his persuit to claim Revenge on his Family, Erebus Attacked the One True Precious Thing to His Brothers and Sisters, Their Creation.... The Humans, Elves and Dwarves of Archos. Amid the Battle Althena's Staff was created with the Last Bit of Her Protective Blessing to Save Her Children, the citizens of Archos, From Erebus. The Zephyr Scythe crafting from the blade used to defeat the Great Dragon and the skull crafted by from nothing but one of the claw bones, just to imagine the sheet size of the Great Dragon.

Please inquire on our discord channel if you would like to make a donation to have something introduced into the mod that you want. This can include Weapons, Spells, Materials, Creatures (Must supply the model with working animations), etc.

PLEASE NOTE: ALL WEAPONS/STRUCTURES MUST BE SPAWNED CURRENTLY. THERE IS NO LEARNING MECHANISM IN GAME UNTIL THE SERVER/CLIENT SIDE IS UPDATED LATER
Popular Discussions View All (4)

Whistopher Cralken Jul 24, 2020 @ 10:03pm
But it doesn't just knock you out, it only does that when you right click. It's just a stamina draining button as far as I can tell.

Darinius417  [author] Jul 24, 2020 @ 5:35pm
@Mike i apologize, I wish i could tell you. We lost the source code to this awhile back and once the updates come out, it will most likely no longer work anyway. But if i recall correctly, your trade off for its high damage is knocking you out.

Whistopher Cralken Jul 24, 2020 @ 4:54am
So what does the scythe actually do? The right click seems to just drain stamina to the point of knocking the user out. And it has a 1 second buff that occasionally appears but doesn't seem to do anything.

Manalo  [author] Mar 27, 2020 @ 8:55am
In this KS update we show case the puzzle sstem for TwilightStar Heart of Eir
https://www.kickstarter.com/projects/dragonclawstudios/twilightstar-heart-of-eir/posts/2795154

Manalo  [author] Mar 19, 2020 @ 7:05pm
For those that are interested the Kickstarter campaign is live!
https://www.kickstarter.com/projects/dragonclawstudios/twilightstar-heart-of-eir