Store Page
Torchlight II>  Workshop > Nanto Suicho Kenny's Workshop
This item has been removed from the community because it violates Steam Community & Content Guidelines. It is only visible to you. If you believe your item has been removed by mistake, please contact Steam Support.
This item is incompatible with Torchlight II. Please see the instructions page for reasons why this item might not work within Torchlight II.
Current visibility: Hidden
This item will only be visible to you, admins, and anyone marked as a creator.
Current visibility: Friends-only
This item will only be visible in searches to you, your friends, and admins. 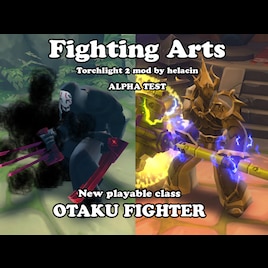 This item has been added to your Subscriptions. Some games will require you to relaunch them before the item will be downloaded.
Description
Fighting Arts Mod for Torchlight 2 (version .1126)

A character with skills inspired by various manga, anime and fighting games.
This is more of a fun class which experiments with different things to do with skills.
Base move speed and charge gain is slower than other classes, but attack range is slightly increased. Gains charge slightly slower than other classes.
As a hybird class, you only gain 10% damage reduction, unlike other melee classes.

A variety of skills with different requirements aims for players to find interesting combos and builds.

A version of this mod without any skill nerfs is available at http://www.runicgamesfansite.com/vbdownloads.php?do=download&downloadid=428
Download that one if you prefer to play the Otaku Fighter at its original power levels.

Fixes
Clarifications on some tooltips
Saiha and Soul Calibur buffs now show on the UI
More spawn classes fixed, so you should no longer get empty quest rewards.

Nanto Suicho Kenny  [author] Aug 14 @ 7:46pm
Hi guys, thanks for the comments, but I'm no longer working on this mod. Have moved on to other things.

Yes, Party Pooper skeleton is part of this mod. Never got round to finishing it because I lost a bunch of the files and then couldn't remember what I was doing with it.

Awkward Aug 13 @ 12:45pm
so, party pooper is your class too? do you plane to modify/develop further this game mod/classes?

699999999statmansaitama deadpool Apr 13 @ 10:50am
pls add an one punch man class with saitama sprite for this mod and unarmed damage genos pet and is skills and its stats per stat level and level

Talisman Jan 9, 2015 @ 4:33pm
I've been trying to gather all the pieces of the Faceless set, but cannot seem to find the rings, amulet, or belt. I believe they should exist since the set has a 12 piece bonus.

xan_aners: Yeah, that's an old bug which affected a bunch of mods. As I haven't worked on this mod for a long time now, I don't know if anyone ever found out a solution for it. A workaround is to take off your items, add stats and then put the items back on. Apologies for the trouble.

Xan Oct 17, 2014 @ 9:39pm
I'm having an issue, and correct me if I am wrong. I'm assuming this mod is the one that adds in percentage based gains for wearing a set of armor, the particular set is Armory of the Undead. Upon wearing the 2 required items to gain the 5% strength bonus, if you invest a stat point into strength the game is unable to handle the addition along with the simultaneous % gain in that stat and forces a crash. Apart from that, fantastic mod and keep it up, man!

❖Uriel❖ Oct 9, 2014 @ 7:24pm
just for some clarification *im not the sharpest tool in the shed* are you working on anouther mod or just dealing with life stuff?