Greenlight > Games > Krillbite Studio's Workshop
Greenlight is being retired. For more information on how to submit games to steam, refer to this blog post.
This item has been removed from the community because it violates Steam Community & Content Guidelines. It is only visible to you. If you believe your item has been removed by mistake, please contact Steam Support.
This item is incompatible with Greenlight. Please see the instructions page for reasons why this item might not work within Greenlight.
Current visibility: Hidden
This item will only be visible to you, admins, and anyone marked as a creator.
Current visibility: Friends-only
This item will only be visible in searches to you, your friends, and admins.
Among the Sleep
Description Discussions27 Announcements14 Comments2296 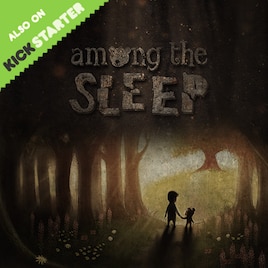 View Among the Sleep in the store

Store page
Recent Announcements View All (14)
Among the Sleep is out!
June 19, 2014 - Krillbite Studio

And it feels incredible!

We sincerely hope some of you’ve had time to play it, and that you enjoyed the experience! The game is finally on Steam, and that’s thanks to all your kind support here on Greenlight!

Thank you all very much!
- The Krillbite Team

Read More
Among the Sleep releases in exactly one week! (New trailer inside)
May 22, 2014 - Krillbite Studio
Great news everyone! Among the Sleep is basically ready, and will be released for PC, Mac and Linux on May 29th, 2014! (And PS4 a while after - more details on that to follow)
But isn’t that’s only a week away?

Yes, yes it is! And during the short wait, please enjoy the freshly squeezed Announcement Trailer!

A lot is going through our minds now. There’s both lot’s of stress and joy in finally being able to share our project to the world! It’s also been a long ride for us, so it’s not without melancholy that we are now gazing upon the end. But it is mostly with excitement and pride - we cannot wait to share the game with the world, and in turn having the world tell us its thoughts. And feelings.

But we still have one week to go, and we want to spend every single minute to make the game as good as we can. There’s always a small detail that can be improved, a bug that can be found and quashed, and we will not rest until our tired fingers push the great and powerful Release Button in one week!

- The Krillbite Team
Read More
Description
Release date: Spring 2014
Among the Sleep is a first person horror adventure, in which you play a two year old child.
What happens when you mix a child's perspective and imagination, with the surreal nature of dreams? Quite a lot, I guess, but we think one of those things is an interesting premise for a horror adventure.

The game is heavily based on atmosphere and exploration, and using the two year old child’s perspective. For example you’ll be able to see your own body at all times, and you will have to interact with the environment to find places to hide from dangers.

What type of gameplay can we expect?
There might be threats hiding in every shadow, but there’s no traditional combat. Instead of fighting, players will actively have to find places to hide in the environment, and avoid confrontation to survive. For example in cupboards and under furniture. We’re aiming to include some puzzle and adventure elements as well, but our main focus lies on exploration, atmosphere and horror.

Regarding the environmental interaction you’ll be able to push, pull and climb objects to reach places, open and close doors, make a staircase out of drawers, peek around corners, carry and place small objects, and the list goes on. It's physics based, and basically we want to make the worlds as interactive as possible.

Storyline
We want to tell a compelling story both through an interesting plot and through metaphor, relating to what actually evokes this fear and confusion in the child. After waking up alone in your bed, strange things are happening around the house. We're mixing the surrealistic theme of dreams and children's imagination, so after you start exploring you'll be dragged into a long struggle, through diverse environments, while searching for comfort and safety. Will you find your parents?

Platforms
We want as many people to be able to play Among the Sleep as possible. It will definitely be released for PC, MAC & Linux, and we are in dialogues about a possible console release as well (with limited resources this is challenging, so it depends a bit on the Kickstarters success). We're hoping to get it released on both Steam, GOG and other platforms, and in addition we will be offering a completely DRM-free version through paypal / amazon from our own website.
< >
2,296 Comments

AlienGorilla May 15, 2014 @ 7:07pm
played the demo, it was ridiculously fun, cant wait for the real release

Bauxx May 9, 2014 @ 10:27pm
This game looks really promising , I really love how the perspective is different from the rest of most horror game - what not the theme is set to be quite uncommon.
In addtition to that , made by such a dedicated team would meant the game to be personally taylored to horror-seeking-fan's "itch" for a good adventure-scare.
So looking forward to it.

Among the Sleep has been Greenlit and is now listed in the Steam store. For the latest information, purchase options, and discussions for Among the Sleep, please see it on the Steam Store or in the Steam Community.
Visit Store Page
For more details Visit Community Hub
For latest discussions
If you really, really want to, you can continue to the Greenlight page. Information on this page may be out of date, since all the action has moved to the areas noted above.