Greenlight > Games > counterStrike12355's Workshop
Greenlight is being retired. For more information on how to submit games to steam, refer to this blog post.
This item has been removed from the community because it violates Steam Community & Content Guidelines. It is only visible to you. If you believe your item has been removed by mistake, please contact Steam Support.
This item is incompatible with Greenlight. Please see the instructions page for reasons why this item might not work within Greenlight.
Current visibility: Hidden
This item will only be visible to you, admins, and anyone marked as a creator.
Current visibility: Friends-only
This item will only be visible in searches to you, your friends, and admins.
Rex Rocket
Description Discussions1 Announcements11 Comments216 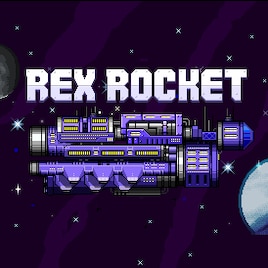 counterStrike12355
Offline
See all 44 collections (some may be hidden)
Kickstarter

View Rex Rocket in the store

The game was mistakenly released today due to a goof-up we had in our Steam settings. Rex should be live in about a month though. Stay tuned!

We are excited to announce that our official site for Rex Rocket is now live at http://www.castlepixel.com/rexrocket ! There you can view a trailer and screenshots, learn more about the game, and download a demo. We are also thrilled to say that Rex Rocket is one of 15 games chosen for the Indie Megabooth at GDC 2014 in San Francisco!

Read More
Description
Release date: Early 2014
Demo and pre-orders now available!
We are excited to announce that our official site for Rex Rocket is now live at http://www.castlepixel.com/rexrocket as well as a demo and pre-order! There you can view a trailer and screenshots, learn more about the game, and download a demo.

We are also thrilled to say that Rex Rocket is one of 15 games chosen for the Indie Megabooth at GDC 2014 in San Francisco!

Kickstarter Steam Keys
If the game is greenlit, any Kickstarter backers who pledged $10 or more will receive a free Steam key in addition to the digital download of the game!

What is Rex Rocket
Inspired by the retro glory days of 8-bit games, Rex Rocket is a traditional 2D platformer brought into the 21st century. Paying tribute to classic NES platformers like Mario, Mega Man, and Metroid, old-school platformer fans will find Rex Rocket a breath of fresh air. Rob and Tyler, two passionate indie game devs, have a mission to keep the world of retro games alive. Rex Rocket features one-of-a-kind handmade pixel art, over 100 handcrafted levels connected in an expansive starship filled with a wide variety of puzzles, enemies, hazards and bosses. To top it off, we have an an orginal, kick-ass chiptunes soundtrack by Saskrotch. Creating this universe and the memorable characters in this game has been a true labor of love.


What is it about?
Set in Earth's distant future, Rex Rocket references the classic story of Man vs. Machine. You play as Captain Rex Rocket, a former war hero who now spends his days transporting scientists around to the far reaches of the universe in his epic Star Cruiser, the S.S. Montana. The game begins on Earth with Rex and crew on a routine mission for the Council of Science, to transplant bio-engineered Terra-Oozlings to an uninhabited planet in the far away solar system of Washington. While the ship's crew are all in cryo-sleep, all heck breaks loose when Terra-Oozings escape their tanks and cause the ship's main computer, LAUREN (Logic Analysis User Reactive Entity Network), to go insane. It's up to Rex Rocket to stop the computer,rescue his crew, and save the day!


Who are we?
Tyler Budolowski: By day, a mild mannered student at The University of Toronto, but by night you'll find him scouring the city, illuminated by the glow of his laptop screen, slinging 1s and 0s into a story about a forgotten space Captain named Rex. As a young child Tyler grew up with a Gameboy in his hands, playing Legend of Zelda and Super Mario Land over and over and over again. A programmer of various languages for almost 10 years now, what he lacks in actual knowledge he makes up for with an unwitting ability to solve any problem in the simplest, least obvious, way.

Rob Maher: Web developer by day and Indie-Game Creator by night. Artist, animator, programmer, and game designer—when their powers combine... they form Rob. Rob's love for old video games springs from his time as a child while sitting for hours on end in front of the family TV playing the NES with his older brother by his side.

Nigel Shields: The composer, more commonly known as Saskrotch, is an innovator in the field of deciding which notes go in what order and for how long. Since becoming involved in the chiptune scene in '04, he's started two chip labels (Give Daddy The Knife and Handheld Heroes), played multiple Blip Festivals, the Era New Horizons film festival in Poland, and has been featured in the music of 8 Bit Operators, Inti Creates Records, and 8bitpeoples. This will be his 4th game soundtrack.

Rosstin Murphy: A game designer with a silly hat. By day, he makes games. By night, he also makes games. They say he has previously lived in China, Indonesia, and on the moon. He's an alumnus of the mysterious Game Creation Society. Rosstin's last projects were King's Ascent and Queer Catboy Love Triangle Disaster. His credo is "Why are you reading this instead of making a game? Get back to work."

Miguel Vidaure: Game writer and designer wielding 3+ years of experience, a boundless imagination, and plenty of that God-given stuff known as talent. Has a great passion for games fueled by a childhood during the best decade ever [non-rose tinted citation needed] with gems like Ocarina of Time and Chrono Trigger. Particularly loves writing for games where he can sneak in a fart joke or two. (See: Rex Rocket easter eggs)

Release date
We will release Rex Rocket when we feel it's ready to be released. But if we had to guess when that would be... January 2014. With Kickstarter funding, we can invest more time and resources into the game's development and pump Rex Rocket to the max.

Rex Rocket is being developed with the XNA framework. We are 100% positive that the game will come out for PC. If it's called a platform then we want to stand on it! So far we have confirmed that Rex will be on PC, Mac and Linux.

Send us a pledge on Kickstarter!
http://www.kickstarter.com/projects/1441844041/rex-rocket

McButterpants Apr 21, 2014 @ 5:29pm
...as he sat hunched over in his cramped quarters on the S.S. Montana, Rex let out a long sigh. It was quiet on the ship; all the techs and boffins tucked up in c®yo™.
Peering out through the squeaky-clean porthole, at the vast expanse of stars he used to command. “Ah, those were the days!” Rex called out to the empty air and nostalgia.
He thought he heard himself faintly echo back above the constant buzz of the tin box he was trapped in... but craning his neck, and really straining. Was it? Was it chanting he could hear?

The vacuum of space and the endless weeks of waiting, loneliness and wondering - is the mission ever going to start? It's enough to give any sensible man a case of the space-willies.

JPlay Mar 31, 2014 @ 2:57pm
This looks great! Shooters aren't normally my thing, but the level design, boss feel and awesome music on display in the video have all caught my interest.

Rex Rocket has been Greenlit and is now listed in the Steam store. For the latest information, purchase options, and discussions for Rex Rocket, please see it on the Steam Store or in the Steam Community.
Visit Store Page
For more details Visit Community Hub
For latest discussions
If you really, really want to, you can continue to the Greenlight page. Information on this page may be out of date, since all the action has moved to the areas noted above.