Store Page
Space Engineers>  Workshop > wolfenray73's Workshop
This item has been removed from the community because it violates Steam Community & Content Guidelines. It is only visible to you. If you believe your item has been removed by mistake, please contact Steam Support.
This item is incompatible with Space Engineers. Please see the instructions page for reasons why this item might not work within Space Engineers.
Current visibility: Hidden
This item will only be visible to you, admins, and anyone marked as a creator.
Current visibility: Friends-only
This item will only be visible in searches to you, your friends, and admins. 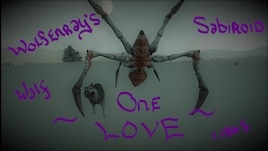 wolfenray73
Offline
See all 139 collections (some may be hidden)

This item has been added to your Subscriptions. Some games will require you to relaunch them before the item will be downloaded.
Description
Hey, are you tired of your pets standing around doing nothing but being annoying? Maybe your Sabiroids jump in and out of the dirt making noise for no good reason. Did you try and get them patched up, only to cannibalize the crap out of themselves?

Then this is the mod for you. I usually make youtube videos with this game, and play single player alot. I do dabble in MP but that always has been a hot mess, so I stay away from it. Because of this, wolves and sabiroids are a big part of the SP experience, but on update 1.186.5 became a useless side note. Nikolas March had a patch: https://steamcommunity.com/sharedfiles/filedetails/?id=1336820054, but when I made my videos and watched my buddies videos (Raymond Blair, GetBrocked, Robertson/Baraban) the 'pets' ate each other if they could not eat you.

So I set out to fix that. I saw the concept about the pathfinding and converted it over to a no pathfinding to target as was done in Nikolas March's work. I expanded upon that a bit so that the pets do not get right in your face to attack, so you are not shooting at your feet to kill them when they are upon you. I also made them not drop loot (sorry to those who like that sort of thing), and modified the behaviors a bit. The wolves may attack then run away, or just run away. The sabiroids will attack relentlessly and in force.

So why did they eat each other? Well it was because the SPID faction was missing certain parameters and definitions. In the .sbc file there are even notes by the developers that this is something known to them, so maybe they will fix it or have plans to improve it. I do not know or care, so I fixed it now by defining that the SPID faction do not engage in friendly fire. Voila, simple fix! Now my pets love each other again, and set out to eat me and not each other like they should!

One more thing, I diversified the creatures so expect some pleasant surprises. The black Sabiroids are tough and fasts, while the white ones are the weakest. However, they will crawl up walls to get you so grip your gun tight, Starship Trooper! Wolves are really fast in forward motion, but 1 or 2 bullets will take them out. Good luck getting the shot, just like in real life, if you shoot at the wildlife it tends to run away not charge you.

So now the SE family is back to ONE LOVE! May you benefit from it.

-Spiders now subject to kinematic vectors (feet/body conforming to terrain). This will allow for greater movement when crawling on walls and rough terrain. Also, makes them more creepy and menacing to look at when they advance upon you!

-Loot enabled. Loot is determined by species in weight, volume, and time to aquire. The tougher the animal, the more you get, the less time you have to get it.

-Wolves spawn only once or twice during day. One to a few in number. Will spawn 1-3 hundred yards away and will only attack if they are really hungry. Otherwise, will run away.

-Wolves spawn 2 or 3 times at night, up to several in a pack. Same behavior as previous point.

-Sabiroids spawn 2 or 3 times during day, from one to a dozen. Sabiroids will spawn 3 or more during night with a few up to a horde.

-Sabiroid behaviors adjusted in the following ways:
*may attempt to deburrow directly underneath Astronaut for an attack, jump, or to latch onto player.
['Jump' is when spider launches from the ground, latching to Astronaut and propelling him high into the air in a suicide attack]

-Sabiroids may also jump at Astronaut from walls, high ledges, above, below, or even in a charge. Jump attack in this manner may have the same affects as the previous point's description.

-Spiders also able to traverse ceilings, though this ability is limited

-Added script to have spiders to attack grids except heavy blocks, does not function as spiders only target charaters atm

- Did not change to new pathfinding system with Sabiroids, as it conflicted severly with the wall crawling mechanics.

Chipstix213 Jun 29, 2020 @ 2:27am
how does this affect loot drops? i'm seeing an incompatibility with other animals and I wonder if its this?

Hewlett Craphard Sep 23, 2019 @ 3:02pm
It seems to with spiders. Seems wolves are broken. But I don't really care about wolves, because wolves in a space game is stupid anyway. lol

Ryukki Jun 29, 2019 @ 3:26pm
Keen broken hardcoded NPCs are to blame. Wolves only exist for 5 seconds and have a high chance of spawning too far (1km) for this mod to lock on to players if your on Earthlike. I play on Medieval Planet with closer npc spawn radius.