Store Page
Transport Fever>  Workshop > Mistress Julianne's Workshop
This item has been removed from the community because it violates Steam Community & Content Guidelines. It is only visible to you. If you believe your item has been removed by mistake, please contact Steam Support.
This item is incompatible with Transport Fever. Please see the instructions page for reasons why this item might not work within Transport Fever.
Current visibility: Hidden
This item will only be visible to you, admins, and anyone marked as a creator.
Current visibility: Friends-only
This item will only be visible in searches to you, your friends, and admins. 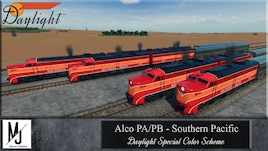 This item has been added to your Subscriptions. Some games will require you to relaunch them before the item will be downloaded.
In 1 collection by Mistress Julianne
Southern Pacific Lines

9 items
Description
This is a repaint of the Alco PA in Southern Pacific's Daylight Special scheme. Included is the A unit, B unit, A unit reversed, as well as multi units of A/B, A/Ar, and A/B/Ar.

Note: This is my first mod so please let me know if something doesn't work as intended.

In game text:
"The Coast Daylight, originally known as the Daylight Limited, was a passenger train on the Southern Pacific Railroad between Los Angeles and San Francisco, California, via SP's Coast Line. It was advertised as the 'most beautiful passenger train in the world,' carrying a particular red, orange, and black color scheme. The train operated from 1937 until 1974, one of the few passenger trains retained by Amtrak in 1971. Amtrak merged it with the Coast Starlight in 1974."

I would need the model to be modified to make the second headlight actually light up, so it's just the image of one.

Churchbuilder Jul 30, 2018 @ 4:42am
Overall you did a great job with that paint scheme. But one thing i have to mention is that the front logo is at the wrong position. After a few years in service all the SP's PAs where equipped with a second headlight at the position where you placed the logo. The logo should be more downwards in the middle of the orange area just above the pilot.

Mistress Julianne  [author] May 30, 2018 @ 5:51pm
I'm only doing repaints, so sadly not until someone else creates the model for those.