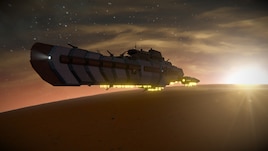 vince.t
Offline
See all 4 collections (some may be hidden)

This item has been added to your Subscriptions. Some games will require you to relaunch them before the item will be downloaded.
Description
The Stalwart is one of the oldest starship classes within the Cophuranee navy. Distinctively reminiscent of warships from times before the great Exodus it set the foundation for the Cophuranee starfleet. Dispite its age the Stalwart has yet to lose its edge and stays true to its name.

A destroyer by category it is actually more of a small cruiser that can well hold its ground, thanks to a large number of anti fighter and point defense cannons lining its upper decks and holding off enemies while the ship's heavy turrets make short work of enemy capital ships.

I wanted the ship to look reminiscent of 20th Century battleships, hence the mostly sleek hull with more detailed superstructure ontop, even featuring various catwalks for spacewalking safely without falling down ^^.

The ship is atmosphere capable even on high gravity worlds, although not designed to actually touch down. It used to have landing gear in an earlier stage however the actual way in and out through that bit of superstructure kinda felt off to me. So no landing. Still, it's great used to bomb targets below =)

So yeah, I'd say it does work. The upward thrusters deliver enough momentum to get you out before the fuel runs out.