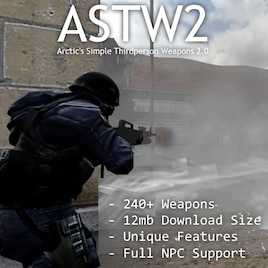 Arctic
Offline
See all 7063 collections (some may be hidden)

This item has been added to your Subscriptions. Some games will require you to relaunch them before the item will be downloaded.
Description
This addon is now OBSOLETE: Use ACT3: Arctic's Customizable Thirdperson (Weapons) 3.0 instead!

Unfortunately, killing is one of those things that gets easier the more you do it.
- Solid Snake

Overview
ASTW2 is the sequel to ASTW, the only previous third person addon on the Workshop. Inspired by games such as the ArmA: Armed Assault series, Metal Gear Solid (And particularly, MGSV), and the Grand Theft Auto (Particularly, GTA V) series, this weapon base and pack is like nothing you've seen before - guaranteed.

Rage_Panzer : Neo, I know what your problem is bud, it happened to me too, but I found a fix.

Go into the Client setting of ASTW2 in the Options tab in the Q-Menu.

From there, turn off the Forced Custom Camera setting.

The reason it causes your camera to bug out is because they're fighting over which is domniant over the camera view, so make sure you either have the Forced custom cam active, or your custom camera active. DO NOT ACTIVATE BOTH.

Features
- FULL NPC SUPPORT!: Nearly all weapons, excluding melee weapons, can be used by NPCs. Have fun!
- Balance: All weapons have been thoroughly tested for a good combat experience. We know that nobody wants to die to something they can't control.
- Camera Integration: The camera system included is tuned for playability.
- True Scopes: Weapons with sniper scopes include the "True Scope" system, allowing them to work as one would expect from a proper game.
- Exceptional Variety: If you can think it, it's there. Antimateriel rifles, 75mm cannons, grenades, grenade launchers, heavy machine guns, assault rifles, .22 caliber pistols, even muskets, antique naval cannons, and wads of money... All at only 12mb! With over 250 weapons, there's bound to be something to fit your bill.
- Animation-Based Melee: Watch out for those models - where they hit is where they hurt you!
- Easier to work with than M9K: With fewer variables to tweak and no viewmodels to rig or align, even the newest modder should find it easy to add guns to the ASTW2 base.
- Immersive Modes: Just because it's tweaked for third person doesn't mean you can't play from your character's perspective!
- Reload Sounds: The holdtypes which are normally silent have custom reload sounds added to them.
- Proper Networking: Works properly on servers or high-lag environments.
- 3D HUD: With, like, cool stuff.
- Spawn Icons: Neat, huh?
- Customizable Camera Modes: With 5 aim camera styles, 4 passive camera styles, and a system for building your own camera, you can truly make your experience your own.
- Loads of Options: Configure and disable or enable almost anything you want.
- Bullets Come Out Of The Gun: Bullets come out of the gun, not your eyes. You'd think someone else would have done this before. A 3D crosshair makes sure you're always on target.
- vFire Integration: It Just Works! Burn, baby, burn!

Commands
- Switch Camera Sides: Use the command, "astw2_switch_sides" to change the side the camera is on. Works with OTS Close and OTS Far modes, as well as custom cam.
- Drop Weapon: Use the command, "drop" to drop and unload your current weapon.
- ENABLE FIRSTPERSON/FIRST PERSON: Type "astw2_camera_enabled 1;astw2_camera_aimmode 0;astw2_camera_passivemode 0" (No quotes) into your developer console. You can also use the options (Q->Options->ASTW2->Client).

We need a list of commands to make custom guns.
BonezNStonez
< >
1,065 Comments

O'Neil Oct 21 @ 6:16pm
@khalil Thank you for trying, but it doesn't do it justice. Passive Mode allows you to turn see your body if you turn your head far enough, and aiming messes with the movement speeds.

O'Neil Oct 21 @ 6:00pm
This is kind of silly. I get that it's trying to be like GTA V with it's third person shooter mechanics, but it just isn't smooth at all. Getting use to this would take more patients than it's worth. I applaud your efforts. Surely I'm part of the minority. Half-star.

icedgaze Oct 4 @ 2:22pm
the camera and movement dont like to work together

icedgaze Oct 4 @ 2:21pm
im having this issue where when i turn it doesnt turn and then when it does it turns to quick

dragonrage519 Sep 18 @ 11:55am
Hey, I got a problem, I can't use one of the weapons because there is no ammo that is considered "Incindiary Grenade" how can I get the ammo?

dragonrage519 Sep 17 @ 10:24am
as it turns out, multiple textures are missing, I have found the axe and the bottle, keyboard, lods of mone, all are missing their textures
< >