Store Page
Starbound>  Workshop > Angry Turret's Workshop
This item has been removed from the community because it violates Steam Community & Content Guidelines. It is only visible to you. If you believe your item has been removed by mistake, please contact Steam Support.
This item is incompatible with Starbound. Please see the instructions page for reasons why this item might not work within Starbound.
Current visibility: Hidden
This item will only be visible to you, admins, and anyone marked as a creator.
Current visibility: Friends-only
This item will only be visible in searches to you, your friends, and admins. 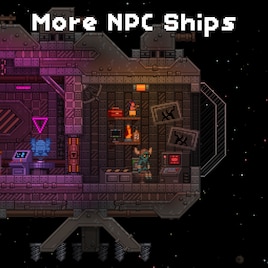 Angry Turret
Offline
See all 25055 collections (some may be hidden)

This item has been added to your Subscriptions. Some games will require you to relaunch them before the item will be downloaded.
Description
Are you tired of those default NPC ships? Do they look same to you? This mod should help you a bit.

Unique Encounters
Those space dungeons are meant to be easter eggs, so they don't spawn very often. However, there you can find small stashes of rare resources and new hats.
- Rogue Satellite. A military satellite that has somehow left its orbit and now threatens everything on its way.
- House in Space. Whoever this house belongs to, they were insane enough to turn it into an improvised spacecraft.
- Giant Snow Castle. Basically, a drifting platform with a giant snow castle upon it. And lots of snowmen.
- Perfectly Generic Ship. You won't find a vessel better than this one.

Miscellaneous
- Space Merchants! If you see a yellow ship on the map, it means you encountered one of the space merchants who would like to sell you some useful (sort of) items. So far there are 15 types of them, and even more are being worked on.
- Mecha Fighters. Rare encounters where you have to "fight" a giant battle robot piloted by a Hylotl.
- Cyberspace Ships. They can only be visited through the Spaceship Simulator that can be found aboard some friendly ships added by this mod.

WIP
- One more unique encounter that I won't spoil so far.
- Polishing the existing space dungeons.

Frequently Asked Questions (FAQ)
- Does this mod still work in the current version of the game?
As long as devs don't change any existing dungeon mechanics and such, this mod isn't supposed to conflict with the game.
- Is this mod compatible with Frackin' Universe?
As far as I know, it is. However, there is one bug when you enter an NPC ship and SAIL says there is no oxygen. It occurs on vanilla ships as well, so I guess it's a problem with FU, not this mod.
- What happens if I uninstall this mod?
All dungeons are based on vanilla content, so it shouldn't change anything in your game. New ships will simply stop spawning, leaving only default ships, anomalies and stations to explore.
- Is this mod still supported?
Well, not always. I don't have much time to update it constantly, and I'm not very experienced with Starbound modding either. But if there is a possibility to add new dungeons or improve the existing ones, I try to do it.

This is my first dungeon mod, report any bugs or issues.
< >
179 Comments

bum0303 11 hours ago
Can I take the spaceship simulator to my b.y.o.ship mode and add it?

Cheesey Wonder 14 hours ago
@Angry Turret
ooooh..... THAT'S ******* AWESOME!!!
sorry to take your time I should've browsed the comments below a bit.
But thank you for the reply, and making this awesome mod! Again, one of the best!
I really hope you come up with more content like this!

Angry Turret  [author] 19 hours ago
@Cheesey Wonder As it was mentioned in the previous comments, it's not really a bug. That one particular space merchant is an ambush to catch the player off guard once in a while.

Cheesey Wonder Sep 20 @ 4:30pm
So I had an interesting little bug.
I raided a penguin flying saucer. Killed everyone. Raided everything. Fun!
After a merchant ship arrived in the system I was in. (It arrived sometime between when I was raiding the penguin saucer, and a few minutes after I went to the outpost to sell stuff and went back to my ship to see if any other vessels arrived in my system)
Sure enough there was a vessel. It was a merchant ship. I went aboard, and it turned out to be a penguin trader ship. The penguins on the merchant ship all attacked me, lol!
I actually thought this was neat, it's kinda like they got angry that I killed other penguins. But, I suspect this wasn't an intended effect so I'd best report it.
I suspect the penguin merchants arrived in the system when I was attacking the penguin saucer, so the merchants somehow took this as though I was attacking them.
Thanks for making this mod! I gotta say it's one of the best ones out there. And I have more than 240 mods :D

Angry Turret  [author] Aug 29 @ 7:16am
@p_trevogin This terminal has a chance to spawn on Cargo Ships and Astronaut Shuttles.

p_trevogin Aug 26 @ 3:50pm
Wait, how do you encounter cyberspace ships? I see there's a new terminal on the screenshot of some sort, but I have no Idea how to obtain it.

Angry Turret  [author] Aug 22 @ 6:45am
@Chet Walters It's intentional. The idea is that those penguins only pretend to be merchants while in fact they try to attack and rob your character.
< >