Store Page
Ravenfield>  Workshop > Vel's Workshop
This item has been removed from the community because it violates Steam Community & Content Guidelines. It is only visible to you. If you believe your item has been removed by mistake, please contact Steam Support.
This item is incompatible with Ravenfield. Please see the instructions page for reasons why this item might not work within Ravenfield.
Current visibility: Hidden
This item will only be visible to you, admins, and anyone marked as a creator.
Current visibility: Friends-only
This item will only be visible in searches to you, your friends, and admins. 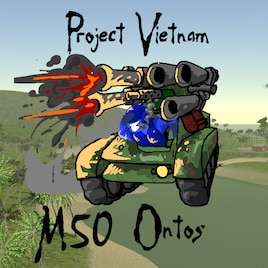 This item has been added to your Subscriptions. Some games will require you to relaunch them before the item will be downloaded.
In 1 collection by Vel
Vel's Seal of Quality

37 items
Description
Do you hate having to wait for the tank to reload? Do you want to fire 6 shells without reloading? Regardless, this is the M50 Ontos 106mm Tank..

-Option to fire all 6 cannons at once

Made by Vel, part of Project Vietnam

The map in the screenshots
Eagle
< >
75 Comments

Mellamomellamo Apr 7 @ 4:37am
Pretty sure this was made before APCs were even a thing, before the new tank was there actually