Store Page
Scrap Mechanic >  Workshop > Xesau's Workshop
This item has been removed from the community because it violates Steam Community & Content Guidelines. It is only visible to you. If you believe your item has been removed by mistake, please contact Steam Support.
This item is incompatible with Scrap Mechanic. Please see the instructions page for reasons why this item might not work within Scrap Mechanic.
Current visibility: Hidden
This item will only be visible to you, admins, and anyone marked as a creator.
Current visibility: Friends-only
This item will only be visible in searches to you, your friends, and admins. 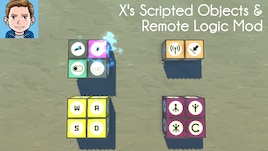 Xesau
Offline
See all 1474 collections (some may be hidden)

This item has been added to your Subscriptions. Some games will require you to relaunch them before the item will be downloaded.
Description
Thanks to Nightmare Fuel for the new textures!

W, S, A and D converter
Make a WASD-converter, using only 4 blocks. Just hook up the driver seat to the WASD converter blocks, and then take the output from those blocks and connect them to whatever you want, such as a thruster.

Thanks to TechnologicNick for finding out how to make the A and D converters!

Memory Bit
The memory bit is a block that can be turned on or off from a logic gate or button input.
Memory blocks lose their state when they are put on the lift. However, they now do save their state when you close the world!

Steam Train Chimney
This block emits dark smoke particles when moving (the faster the train moves, the faster the chimney puffs out smoke), and also emits white smoke when being triggered by logic. Does not work perfectly.

Power distributor
Evenly distributes a power input over all the connected outputs.

Location Finder
Prints exact location of the block to /console when you press E on it.

Particle Machine
Use particles in your creations again! Open /console and paint it one of the following special colors and press E to configure it. Set interval to 0 to use logic triggering.

mistzy ♥ May 27, 2021 @ 5:46pm
number logic engine or similar block? need to be able to have more power depending on how many inputs it gets. idea as follows:

nothing else like this on the workshop. been looking for it to make a realistic diesel-electric and diesel-mechanical locomotive